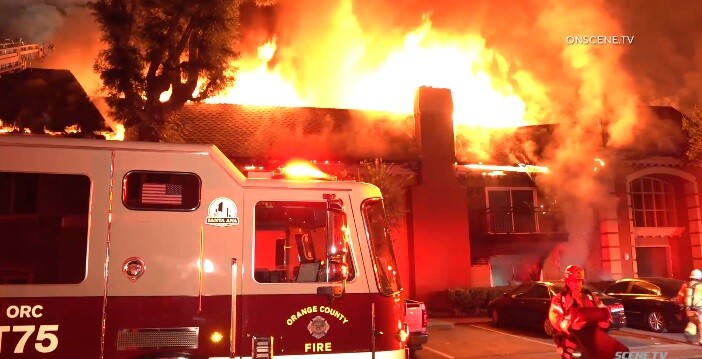 A fire tore through a two-story apartment complex in Tustin early Wednesday, triggering a large response from firefighters and sending two people suffering from smoke inhalation to the hospital.

The blaze broke out in one of the downstairs units of an apartment complex in the 15700 block of Williams Street about 3 a.m. Crews arrived to find heavy smoke pouring from the building and flames licking up into the second story of the structure, Orange County Fire Authority Capt. Tony Bommarito said.

Some residents got out, but firefighters searched the building for any remaining tenants. However, they were forced to leave shortly before 3:30 a.m. when the roof collapsed.

About 100 residents were displaced by the fire. Firefighters have not located everyone who lives in the building, but Bommarito said they may not have all been inside when the fire started.

“They may not have been there or they could have evacuated and went to a friend’s house. We just don’t know at this point,” he said.

Video from the scene showed residents — some wrapped in blankets — standing outside the burning complex.

Authorities have not yet determined what caused the blaze.