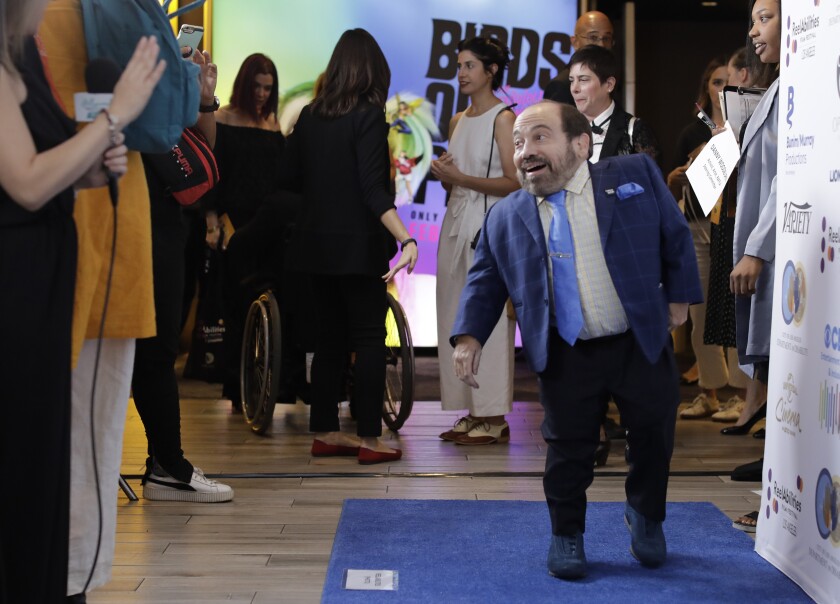 I spent all last weekend at the movies. I couldn’t tear myself away. The ReelAbilities Film Festival Los Angeles was screening such rare footage, I didn’t want to miss the chance to see any of it.

It wasn’t that the features, shorts and documentaries were old, unearthed from an archive somewhere. Their rareness had to do with who was in them and who made them — people you don’t get to see often in Hollywood.

Some of the actors and filmmakers used wheelchairs. Some had Down syndrome. Some had prosthetic limbs. Some were different than many of us in less-visible ways: They were on the autism spectrum. They had bipolar disorder.

In the films shown at the festival, actors with a wide range of disabilities got to play an equally wide range of richly developed roles, many of which emphasized their intelligence, abilities and strength, which is far from the Hollywood norm. They were bolstered in this effort by something else notably unusual: A lot of those writing and directing and working on the films’ crews also were disabled people.

I was mesmerized by the movies at this annual festival, which is produced here by the city’s Department on Disability in partnership with its Commission on Disability and ReelAbilities International. They were laugh-out-loud funny and quirky and paradigm-shifting, and more than one made me cry.

ReelAbilities offerings told different stories. Some — like the short films made in a weekend for actor, comedian (and little person) Nic Novicki’s annual Easterseals Disability Film Challenge — featured casts full of disabled people but plots that refreshingly mostly were not about the disabilities.

In a short film called “CODA,” made as a USC graduate thesis project, I learned about the struggles of a hearing child of deaf adults. In “The Peanut Butter Falcon,” a feature film that hit the big screens this year, I laughed a lot as I watched a young man with Down syndrome ditch the nursing home he’d been dumped in and start living as an outlaw with a fisherman also escaping his troubles.

I also found the fully inclusive way the festival presented them exciting.

I especially loved seeing the captions on the big screen. They featured not just every word every person said but also the sounds, in parentheses: (YELLING), (THUNDER RUMBLING), (ENGINE REVVING), (GENTLE SNORING), (PHONE RINGING). (Once I got used to them, which took just a few minutes, they increased my enjoyment because I understood how much they increased the enjoyment of the highly engaged festival audience.)

The second annual L.A. event felt beautiful and natural and celebratory. But it also felt fleeting and ephemeral and thus a little bittersweet because it exists here for just one weekend each year.

After the ball, Cinderella’s coach turned back into a pumpkin. After ReelAbilities L.A. — whose sponsors included Walt Disney Studios, Universal, CBS and Lionsgate — much of the entertainment industry at every level is likely to go back to doing much what it’s been doing for ages.

At the AMC movie theater at Universal Studios CityWalk, where ReelAbilities was held, I watched as deaf people heartily applauded by holding their hands up and twisting their wrists back and forth. I spent hours in the dark with many people in wheelchairs as well as little people and a blind young man who listened to the movies on a headset, with audio descriptions that filled in what he couldn’t see. We all were able to escape together comfortably into the world of the movies.

But while movie theaters are required by the Americans with Disabilities Act to accommodate the disabled, most meet minimum standards and could not handle the festival crowd without a lot of advance preparation.

A fire marshal had to be called in to make a safety plan for the wheelchairs because the theater ordinarily is set up just for four, I was told by Stephen David Simon, executive director of the city’s Department on Disability. A ramp from the middle of the theater to the front had to be installed on the day the festival started so that participants in the various discussion panels who had mobility issues could appear before the audience to present their thoughts.

A lot of minivans have chairs that can be pulled out to make space — but theaters don’t, which makes it hard to make room quickly for more wheelchairs, Simon said. He called learning about such issues “eye opening.”

The festival tries to spotlight these and other issues that confirm what disabled people often say: They are held back less by their disabilities themselves than by the rest of the world’s failure to embrace and accommodate them. I’ve been learning a lot about such failures lately, and I’m doing my best to spread the word.

As many as 61 million — or one in four — adult Americans have some form of disability, according to the Centers for Disease Control and Prevention. But in Hollywood, the talents of people with disabilities don’t often get harnessed either in front of or behind the camera.

Complex stories taking in the breadth of disabled people’s lived experience aren’t regularly told. And on those occasions when a script features a disabled person, a big-name actor who doesn’t have the disability often will get the part. Disabled actors also rarely get the chance to play the sort of everyday scenes that have nothing to do with disability at all.

If breaking into Hollywood is a long shot for most people, having a disability greatly diminishes those slim odds.

That was one of the things that I heard a lot as I talked to people at the festival and attended panel discussions.

For five seasons, RJ Mitte played Walter White Jr., the son of the central character on the critically acclaimed show “Breaking Bad.” Walter Jr. had cerebral palsy, as Mitte does in a mild form. The role made him a recognizable celebrity who turns heads on the street. But at a panel on how disability is portrayed on the screen, he said he still doesn’t get offered a wide range of parts. He’s mostly tapped to play people with traumatic brain injuries.

“Why can’t the actor with the disability say, ‘They went that way’ or ‘Do you want fries with that?’ That has to open up,” said Gail Williamson, a talent agent focused on diversity at Kazarian, Measures, Ruskin & Associates, who became involved in the field years ago when her son, Blair, now 40, who has Down syndrome, expressed his desire to be an actor.

ReelAbilities started in New York in 2007, and its festivals now have spread around the country and internationally. In L.A., local co-director Michael Dougherty, a disability activist and screenwriter, lobbied to bring the festival here and takes the lead in selecting the films.

Dougherty was born with spina bifida and hydrocephalus. Painful surgeries were a big part of his childhood. He’s had 29 surgeries in all. He said his earliest memory, which shaped the rest of his life, is from when he was 3 and his parents took him to a movie theater to see “E.T.”

“When the spaceship comes down in the very beginning and you see all of those rainbow lights coming through the trees, I remember that I went from scratching at sutures and bandages that were wrapped around my head because I was recovering from brain surgery, I suddenly put my hands down and didn’t feel any more pain,” he said.

Later, when he was 11 or 12, “Edward Scissorhands” would also make a lasting impression on this fiercely intelligent man who has climbed mountains and gone cage diving to see white sharks in South Africa and has two master’s degrees (one in special education and one in screenwriting) and would give anything to have people take an interest in the complex stories he tries to tell featuring fully realized people with disabilities.

“The story of this boy who was considered incomplete who found his way into the world and into people’s lives through art … that completely changed my life because for the very first time I absolutely did not feel alone,” he said of Tim Burton’s movie.

Dougherty led a number of the festival’s discussions, which were conveyed to all with the help of sign language interpreters and comments typed up in real time and projected on a screen.

What often came up was a weariness with the usual Hollywood cliches about disability: That a disabled person who is able to do anything at all — from crossing a street to shopping at a supermarket — is “inspirational.” That the real story should center on the non-disabled who have the heart to reach out and change the lives of those poor disabled people. That if you find yourself paralyzed in a wheelchair, you’ll naturally want to kill yourself. (That story line combined with the casting of a non-disabled actor in the key role in the 2016 romantic drama “Me Before You” infuriated many disabled people.)

I’m feeling a little bad telling you about what I saw now, when it’s too late for you to join me at the festival. Next year, I promise to start urging you to go well in advance. This year there were too many empty seats at most screenings.

Most people who came were disabled people. The festival’s strong messages were preached to the choir. The dream is to fill those empty seats with casting agents, producers and studio executives, to inspire them to reach higher — and with moviegoers like you and me to start to demand that they do so.