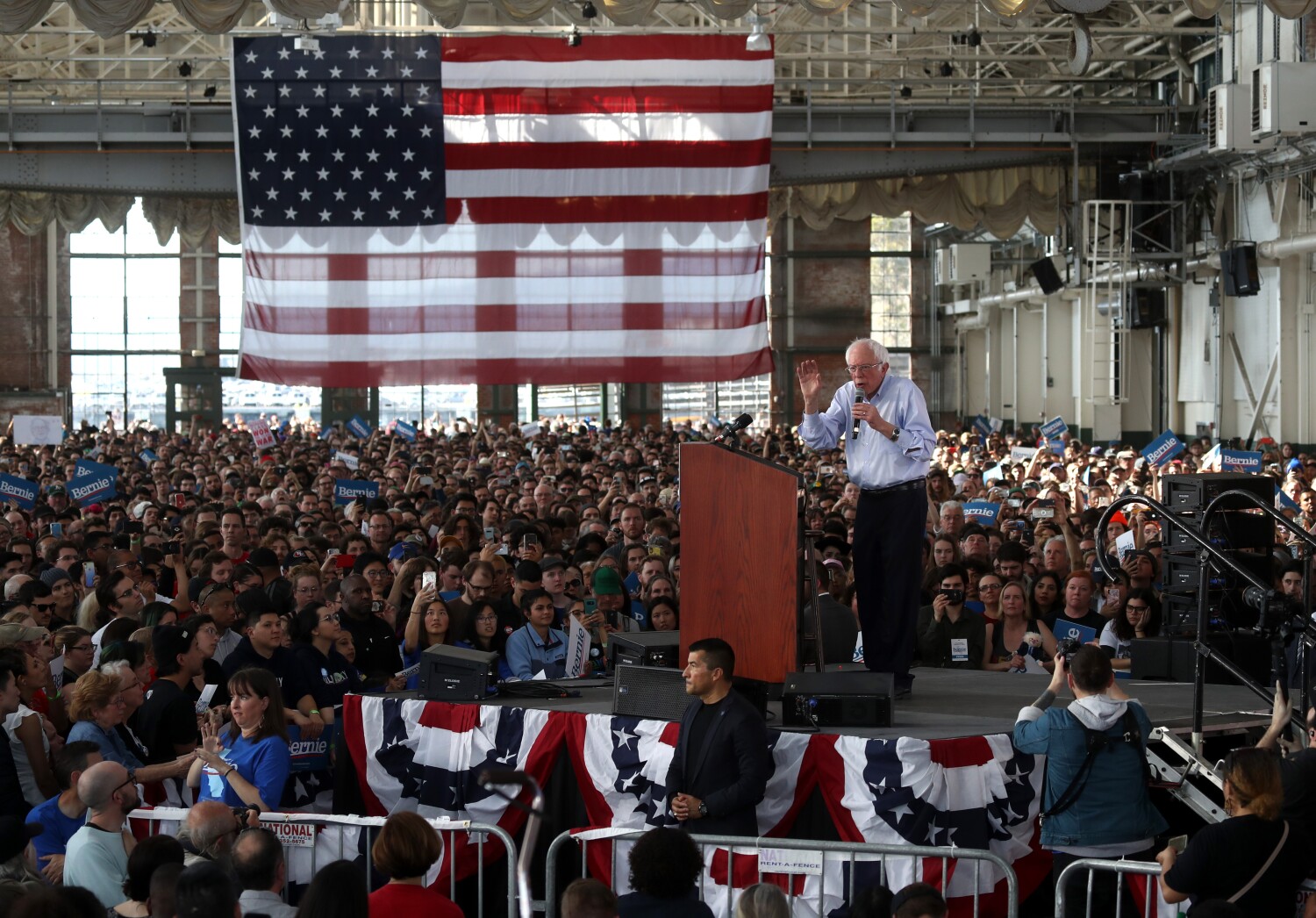 Vermont Sen. Bernie Sanders continued his attacks on rival Michael Bloomberg, accusing the billionaire of trying to buy the election and calling him out for past positions.

“Mr. Bloomberg, like anybody else, has a right to run for president,” Sanders said at a Bay Area rally on Monday. “He does not have a right to buy the presidency. Especially after being mayor of New York and having a racist stop and frisk policy.”

Sanders’ message went over well with supporters gathered in the former home of a Ford Assembly Plant in Richmond, a working class city where the median household income is about $65,000, according to U.S. Census data, and the majority of residents are black or Latino.

The Craneway Pavilion venue, which holds 6,800 people, overflowed for the get-out-the-vote rally ahead of California’s March 3 primary and following Sanders’ win in last week’s New Hampshire primary. Chants of “I believe that we can win” and “Si, se puede” filled the auto assembly plant-turned-venue.

California is likely to be particularly friendly territory for Sanders when the votes are counted, given its diverse and liberal electorate; he is especially popular with Latinos and young people. He urged supporters who are independents to register as Democrats or ask for a Democratic ballot.

“This is the most consequential election in our history… and on Super Tuesday, California is voting,” Sanders said. “And I don’t have to tell any of you, you are the largest state in this country. You have the most delegates in the Democratic National Convention. And the candidate who wins here in California stands a pretty good chance of [becoming] the president of the nation.”

Razvan Mihalache, a student at Diablo Valley College who will be voting for the first time in a presidential election, said Sanders has the “most consistent record” of any of the candidates. “He’s actually the candidate who’s going to fight for this stuff whereas other candidates are lukewarm on it and are going to back off of these policies. ”

John Myles, a lifetime Richmond resident, said the crowd was not an accurate reflection of the largely black and Latino population of his hometown. But he said it was “huge” that the campaign held the rally at the plant that once employed many of the families in the city.

“It exemplifies that he’s the candidate that actually is promoting the working class,” said Myles, whose grandparents worked at the plant where in the 1940s Ford assembled military vehicles down the street from the rally. Myles said he believed the nation often discounted and forgot about the working class. He also said he felt Sanders was the only real option for black voters.

“We always get the same kind of person that says, well, let me be president and I’ll give you more status quo BS,” he said.

Sanders’ appearance in California, instead of in neighboring state of Nevada, where the primary’s next contest is to be held on Saturday, appears to be part of a farther-looking bid to boost support in the more delegate-rich states that hold in-person voting on March 3. His other appearances have included stops in North Carolina, Texas and Colorado.

The latest UC Berkeley Institute of Governmental Studies poll, conducted for the Los Angeles Times and released in late January, had Sanders leading the Democratic field with 26% support, with Sen. Elizabeth Warren of Massachusetts with 20% and former Vice President Joe Biden with 15%. That was before Sanders’ strong showings in Iowa and New Hampshire’s early contests and Warren and Biden’s disappointing finishes.