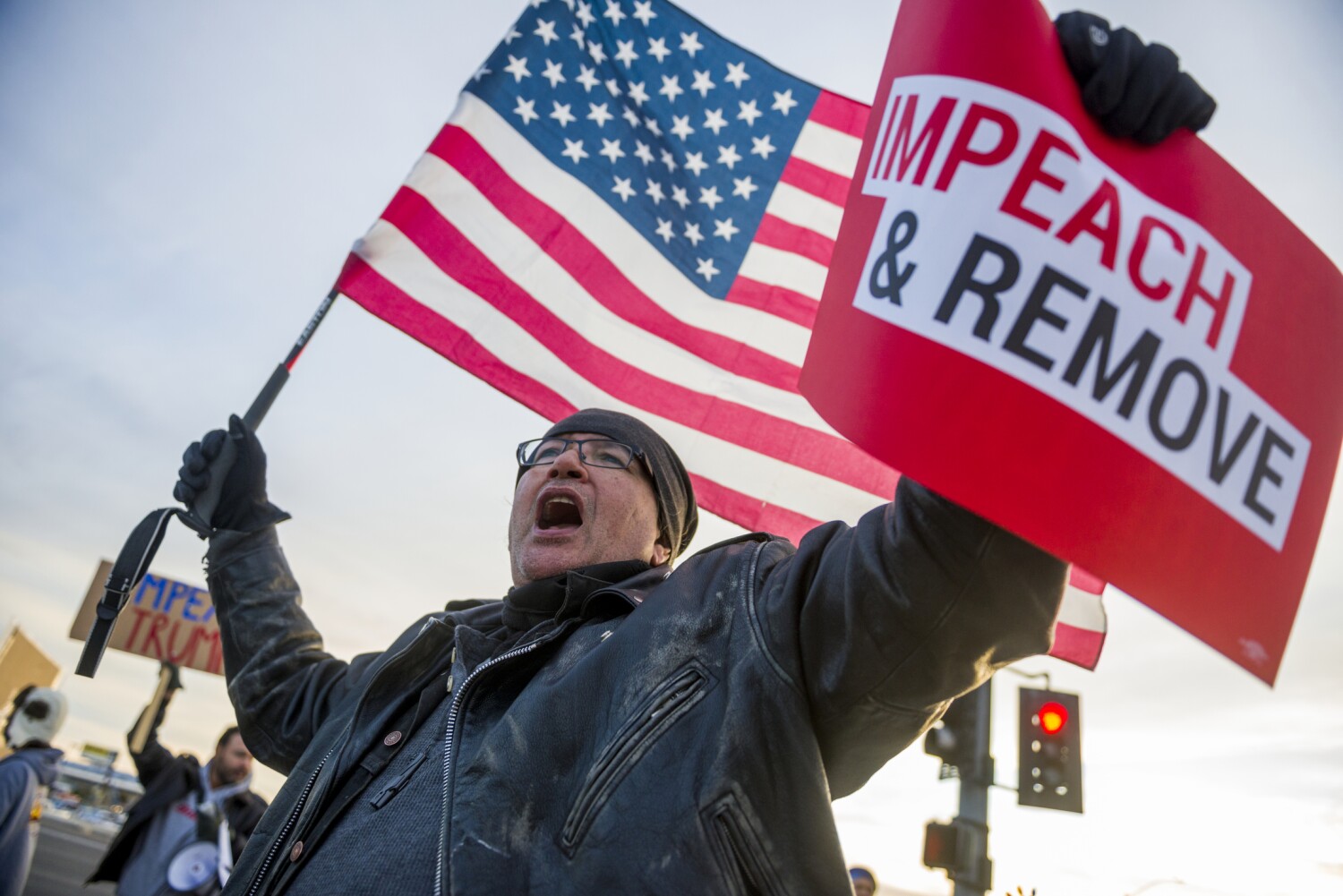 The House vote Wednesday to impeach President Trump for abuse of power and obstructing Congress met with cheers in California, which has been the heart of the resistance to the president and his policies.

Throughout Wednesday, there was interest but also some dismay at the scene in Washington, where Trump becomes only the third president to be impeached.

Gil Bustamante was rolling a trash can into the underground parking structure on Broadway in downtown Los Angeles, where he works as a janitor.

Bustamante, who is strongly opposed to Trump, said he had just been talking to his co-workers about how President Clinton apologized when “they caught him with that lady” and impeached him.

“Trump is a coward. He won’t even admit what he did,” said Bustamante, 45.

“He is a coward,” he repeated, louder and more forcefully. “He’s against everybody. He did abuse the power of the president … walking away from that meeting with the other nations. He’s done a lot of stuff no other president has done.”

Bustamante ticked off other charges against Trump that are not part of the impeachment process: seeking Russian interference in the election, courting publicity in magazines and movies, mistreating women, trade blunders.

“Trump is against everyone. He’s un-American. American is you stick to your beliefs and help others, not just turn your back on everyone,” said Bustamante, who lives downtown.

New mom Sara Feinberg was tossing a Frisbee to her Ausiedoodle at Virginia Avenue Park in Santa Monica while her 2-week-old son napped in his stroller Wednesday. Her in-laws had just flown in from Chapel Hill, N.C., and the three were anticipating the House vote on Trump’s impeachment with muted enthusiasm.

When it came to the House leadership who have championed the process, the trio were far less reserved.

“I think Nancy Pelosi’s been leading with the torch in her hand throughout the process,” Feinberg said.

“Where we live, Nancy Pelosi is thought of as a hero because of how she stands up to this guy,” her father-in-law, Hoyt Taylor added.

Rina Sadiqui sipped an Abuelita Latte at Café Cultura in Santa Ana on Wednesday morning, in a downtown business district.

Sadiqui, a 29-year-old whose parents are refugees from Afghanistan, said the Democrats are justified in their reasoning to impeach Trump.

Still, she doesn’t think impeachment is the right move.

The hearings and impending vote will only further divide an already polarized country, said Sadiqui, a real estate agent who lives in Irvine.

She said she isn’t affiliated with either political party: She’s conservative on some issues — such as abortion — and liberal on others, supporting gay rights.

“I honestly think this entire thing is a joke,” she said of the vote.

She thinks a better alternative would be for both parties to work together, instead of pitting the American public against each other.