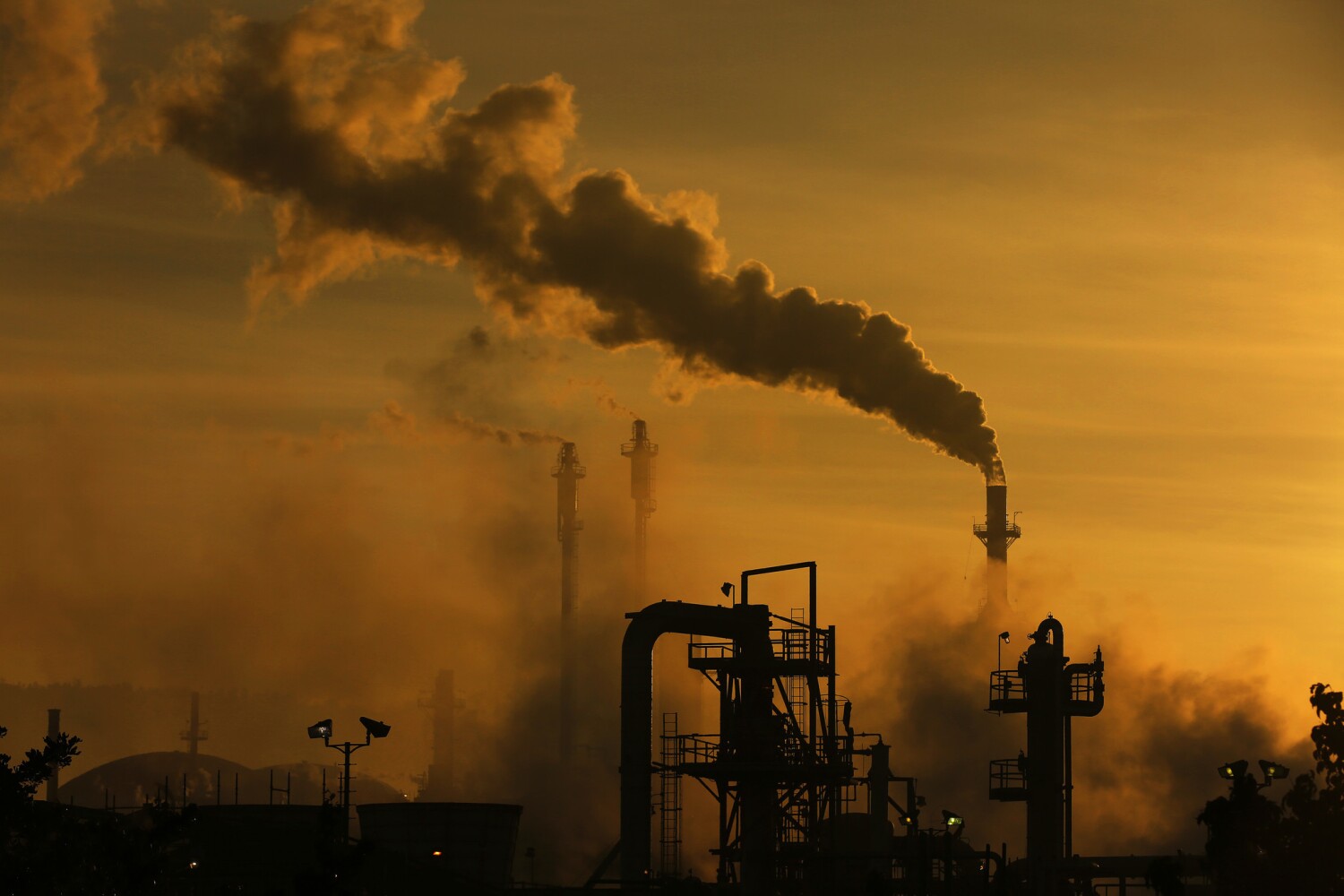 California’s greenhouse gas emissions rose slightly in 2018 due largely to lower hydroelectric power use, according to a report released Monday by the state Air Resources Board.

The state emitted the equivalent of 425 million metric tons of carbon dioxide in 2018, about 1 million more than in 2017, the Air Resources Board inventory found.

Pollution overall remained well below the state’s 2020 climate target of 431 million metric tons, which the state hit four years early, in 2016. But the uneven progress underscores the challenge California faces as it pursues the more ambitious goal of slashing planet-warming greenhouse gas emissions another 40% by 2030.

The uptick in 2018 was mostly due to a decrease in the use of hydroelectric power resulting from lower precipitation in the winter of 2017-18, said Dave Clegern, an Air Resources Board spokesman.

“That emissions category rose about 1 million metric tons,” Clegern said. “That was partially compensated by increases in solar generation and other lower greenhouse gas intensity resources.”

Though the year-over-year change is going in the wrong direction, it is “more noise than anything fundamental,” said Danny Cullenward, a lecturer at Stanford Law School. “Nearly all of the state’s climate gains arise in the electricity sector, where a growing share of wind and solar resources reduces emissions over time, and the variability of large hydropower resources causes headline numbers to fluctuate from year to year.”

“California’s clean energy policies are working to clean up the electricity sector,” he added. “But in other sectors — notably transportation, industry and residential and commercial buildings — policy isn’t on track to achieve California’s climate laws.”

Last year’s inventory by the state showed that emissions reductions slowed in 2017, declining by 1.2%, versus a decline of 2.8% in 2016. To be on a pathway to its 2030 goal, California must reverse that trend and significantly pick up the pace of emissions reductions across many sectors.

In one notable improvement, the annual report showed that transportation emissions dropped by 1.5 million metric tons between 2017 and 2018, the first decrease since 2013. Cars, trucks and other vehicles remain California’s largest pollution source, accounting for about 40% of its planet-warming emissions and rising stubbornly for years as driving miles increase.

Cullenward said he is not concerned about the state meeting its 2020 target to reduce its emissions below 1990s levels and that it “will almost certainly be in compliance,” given that global emissions slowed this year amid the COVID-19 pandemic.

“What worries me is that the Air Resources Board does not have a credible plan for how to get the reductions needed to get to California’s 2030 climate target,” he said. “Reducing emissions below that level requires more than progress in the electricity sector, but the major policy the state has identified to do the bulk of this work — the cap-and-trade program — isn’t working and needs significant reform.”

The state’s main programs for reducing greenhouse gas emissions from transportation fuels, industrial emissions, vehicles and electricity generation already have “considerably more stringent emissions reduction targets starting in 2021” in anticipation of the steeper cuts needed to meet the 2030 target, according to the Air Resources Board.

Clegern said the board’s members are also “developing rules to further rein in short-lived climate pollutants and are working with a number of other agencies to improve sequestration capability on natural and working lands.”