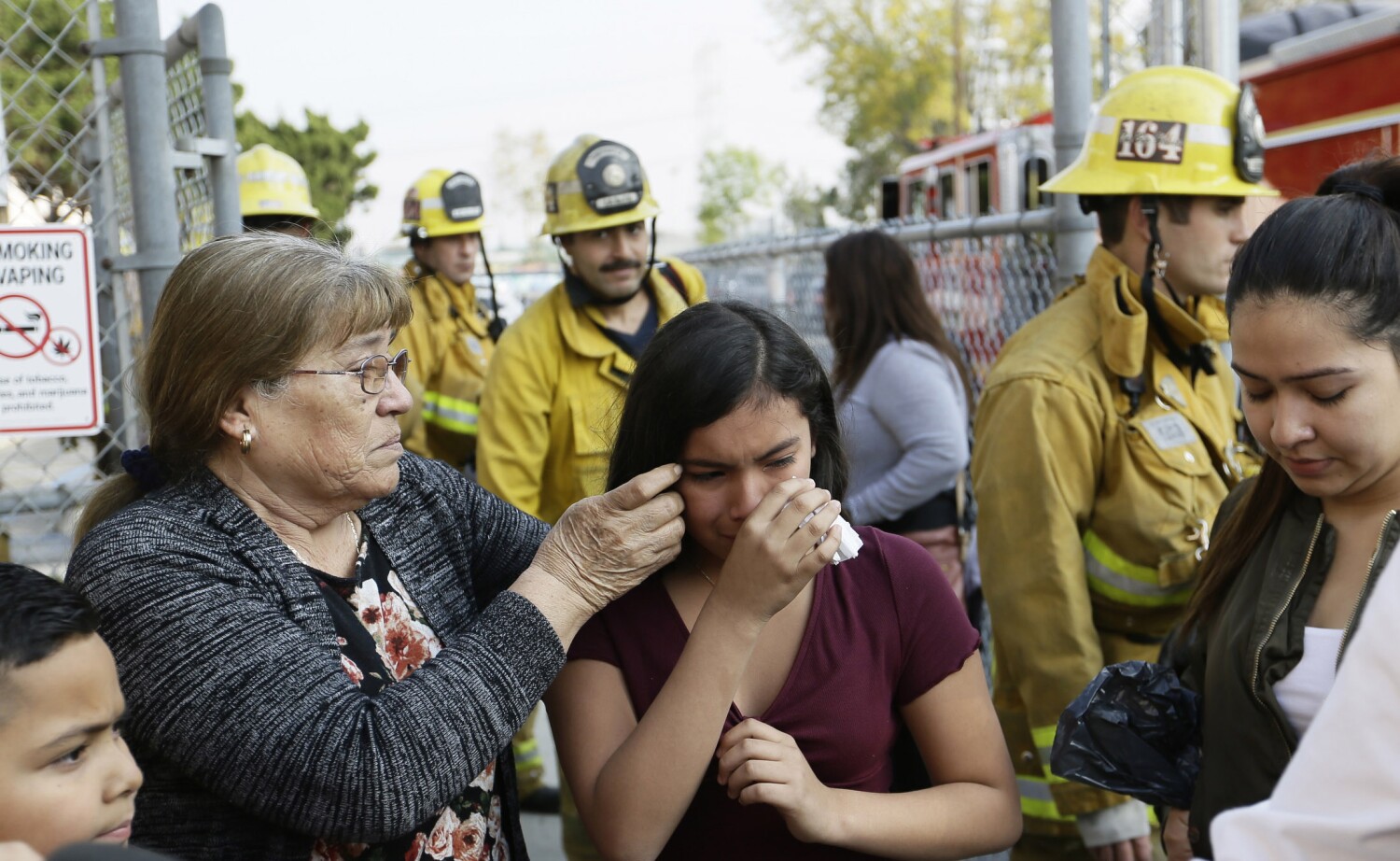 Days after a Delta airliner dumped jet fuel over an elementary school in Cudahy, four teachers are suing the company, saying they’ve suffered emotional and physical distress because the pilot didn’t follow protocol.

“Without any true necessity, the Delta pilot of Flight 89 caused the plane to release what are believed to be thousands of pounds of fuel per second over the city of Cudahy, Calif., and areas under its flight path,” attorney Gloria Allred said during a news conference Friday. “At the time, Flight 89 was flying so low that the fuel it was releasing did not have time to evaporate or dissipate before hitting the ground below.”

The suit, filed in Los Angeles County Superior Court, notes that jet fuel is harmful and dangerous to humans and can cause liver damage, decreased immune response, impaired performance on neurological function tests and impaired hearing, according to the federal Agency for Toxic Substances and Disease Registry.

The plaintiffs seek compensatory damages that would be determined in trial, said Allred, who is representing the four women.

At least 20 Park Avenue Elementary School students were doused by the jet propellant Tuesday morning when the plane abruptly turned back to Los Angeles International Airport shortly after taking off for Shanghai. The pilot radioed the control tower to say that there was an engine problem but that he did not need to dump any fuel to reduce weight before an emergency landing. Yet less than 20 minutes later, the jet — flying at about 2,300 feet — dropped fuel over Park Avenue and the surrounding area.

The effects have sparked outrage in a community that’s been at the center of environmental injustices for decades in Los Angeles County. Dozens of people — many of them children — were treated by paramedics, but no one was seriously injured.

Three of the four teachers, who were not identified during Friday’s news conference, recounted how they saw white plumes overhead and immediately took action once they felt the liquid raining down.

One teacher said she feared they were under terrorist attack while she was taking her first-graders outside for lunch.

“I thought it was raining, and then I caught [the] scent of fuel,” she said.

She said she yelled at her students to get back inside, noting their safety was paramount.

The teacher was given oxygen by firefighters and washed off later that day at home. Still, her headache and nausea remained the next day, so she went to urgent care, she said. Now she’s worried about the long-term health effects for herself, her students, colleagues and friends.

One fifth-grade teacher said her students initially thought what was falling from the sky was rain. They peered up, only to have the “noxious liquid” overwhelm their eyes, mouths, noses, lungs and skin. Students cried and screamed as their eyes and skin began to burn, she said.

“We are all very experienced teachers, but we are not equipped to deal with this level of hazardous contamination,” the teacher said. “We had to ensure the decontamination and care of the students as best we could, until help arrived. In ensuring the immediate care of our students, we were not able to decontaminate ourselves for several hours after the jet fuel had saturated us.”

At least two other L.A. schools were doused with jet fuel. More plaintiffs may be added to the suit as additional teachers, students and parents are interviewed, Allred said.

The Federal Aviation Administration has said it is investigating the matter.

Delta Air Lines spokesman Adrian Gee declined to comment Friday, citing pending litigation. Delta had previously said the pilot was forced to dump fuel over the urban area in order to reduce the plane’s weight before its return landing. However, audio between the pilot and air traffic control at LAX has raised questions over whether that was necessary. Allred said Friday that she’s not yet spoken with the airline.

Normally, pilots offload fuel at higher altitudes so it evaporates before hitting the ground. This time, the Boeing 777 was 12 miles from the runway and low enough to shower the school and adjacent neighborhoods.

The Delta pilot was roughly five minutes into a flight headed to Shanghai when he realized there were problems with the jet’s right engine. An air traffic controller asked whether he needed to return to the airport immediately or to “hold to burn fuel,” and the pilot responded that they had “got it back under control” and would slow down, stay out of terrain and turn back to the airport.

“OK, so you don’t need to hold to dump fuel or anything like that?” the tower asked the pilot, who responded, “Negative.”

It was not immediately clear how much fuel was dropped or what happened between the pilot’s last public communications with air traffic control and the time he landed at the airport at 11:56 a.m.