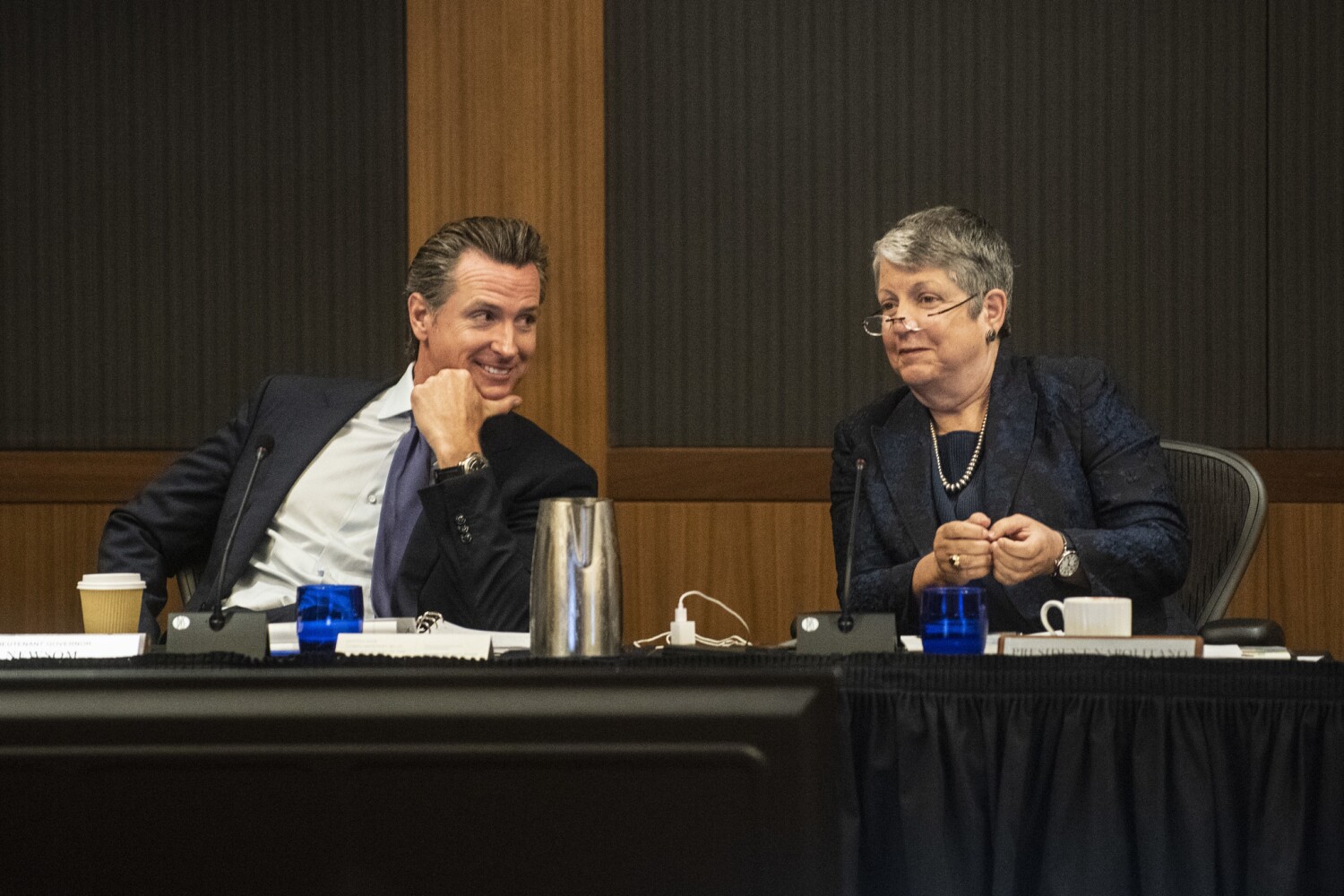 Gov. Gavin Newsom opposes any tuition increase for University of California students this fall, weighing in Tuesday on a controversial proposal that the Board of Regents is set to discuss this week.

“Given the major increase in higher education funding provided in last year’s budget and the similar increase proposed by Governor Newsom for next year’s budget, he believes that the proposed tuition increase is unwarranted, bad for students and inconsistent with our college affordability goals,” his spokesman Jesse Melgar said in a statement.

Newsom consistently opposed tuition hikes when he served on the UC Board of Regents under his previous role as California’s lieutenant governor, a record he campaigned on in the run-up to his 2018 election.

His statement came just hours after UC officials abruptly canceled a vote on the tuition proposal planned for Wednesday, deciding instead only to discuss it and take action at an unspecified later date.

The UC Student Assn. opposes a tuition hike and said it was blindsided by proposed increases over five years rather than just one year.

The delayed vote is not tied to Newsom’s opposition. UC Board of Regents chairman John A. Pèrez said he pulled the vote because it did not meet a requirement between UC and the student association to publicly post details about any proposed tuition increase 10 days in advance.

He concluded the proposal “would be inappropriate to take up, without giving all stakeholders a chance to be heard with appropriate notice,” he said in a statement.

UC spokeswoman Claire Doan said officials missed the window for public posting because they were reviewing Newsom’s budget plan, which was released on Jan. 10. They were unable to complete the work by Jan. 12 as required but posted it seven days in advance.

“We understand and take seriously the concerns by students who have requested more time to consider the proposed plans and welcome ongoing productive conversations with them,” Doan said.

UCSA President Varsha Sarveshwar said Tuesday that the action to delay a vote was a “small but meaningful victory for UC students.”

“We were not sufficiently notified or consulted regarding the five-year tuition increase proposal, and, to their credit, the Regents recognized this and acted on it by delaying the vote,” she said. “We’re also grateful to Governor Newsom for his continued support for students.”

She said students would continue to make the case that “the state — and not students and their families — is responsible for investing in our education.”

The delay is likely to dismay UC chancellors, however, who are struggling with overcrowded campuses and other pressing needs and want action so they can craft their spending plans with some degree of certainty.

UC officials have proposed two plans to increase tuition over five years, which they say will help raise more funds for financial aid and campus needs while helping students and families better plan for college costs.

Another plan would raise tuition and fees once for each incoming class, called cohorts, but keep those costs flat for six years. Under that plan, the costs for the entering class of 2020-21 would increase over last year by 4.8%, or $606, to $13,176 for California undergraduates. The tuition of existing students would be frozen at their current levels.

In addition to those base costs, supplemental tuition for nonresident undergraduates would increase $840, to $30,594, this fall under the first plan and an additional $1,440, to $31,194, under the second plan.

UC President Janet Napolitano had recommended that regents approve either of the plans “so that, as campuses begin extending offers of admission in February for the fall 2020 term, prospective UC students can make informed enrollment decisions, continuing students can know what level of tuition and fees to expect and campuses can prepare to provide the educational opportunities, academic support, financial aid, and student services needed to sustain the University’s unparalleled track record of access, affordability, and academic excellence,” according to a UC memo.