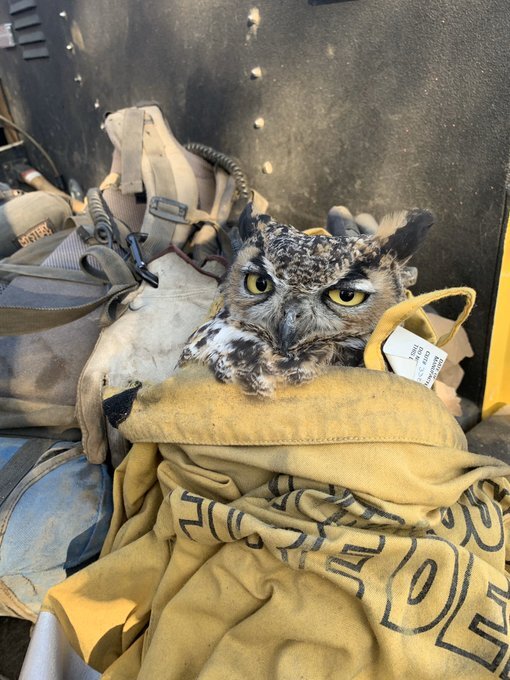 When the flames have calmed, the evacuations have lifted and the damage has been assessed, a fire often boils down to a story of the lost and the found. The people who survived, the homes that were destroyed and the animals that were saved.

As the Maria fire in Santa Paula thinned on Sunday after burning nearly 10,000 acres, an image emerged that lifted spirits. In a series of photos shared by the Ventura County Fire Department, a great horned owl peered out from a firefighter’s jacket, its piercing yellow eyes matching the color of its temporary haven. The owl had been saved from the ashes.

Animal rescue! The @VCFD handcrew helped save this injured Great Horned Owl from the #MariaFire. The owl was taken to Wildlife and Environmental Conservation Inc. and is already on the mend. Check back to see our video with an update. pic.twitter.com/E9lkKA50EP

The owl’s wide-eyed expressions quickly flew across social media. The image of the creature offered a moment of respite from a tense week that saw thousands of residents forced to flee their homes as fires raged across the state.

According to Camarillo Wildlife Rehabilitation, the owl was found “among the ashes, disoriented and suffering from smoke inhalation. Thanks to these courageous men, he will make a full recovery and be released back to his territory as soon as it’s safe to do so.”

The owl was named Ram after the NFL team in nearby L.A. County. Ram is in the care of the Wildlife and Environmental Conservation, the Ventura County Fire Department said on Twitter.

Great horned owls are no stranger to Ventura County. According to the California Mapping Project, the area is one of the owl’s breeding grounds.