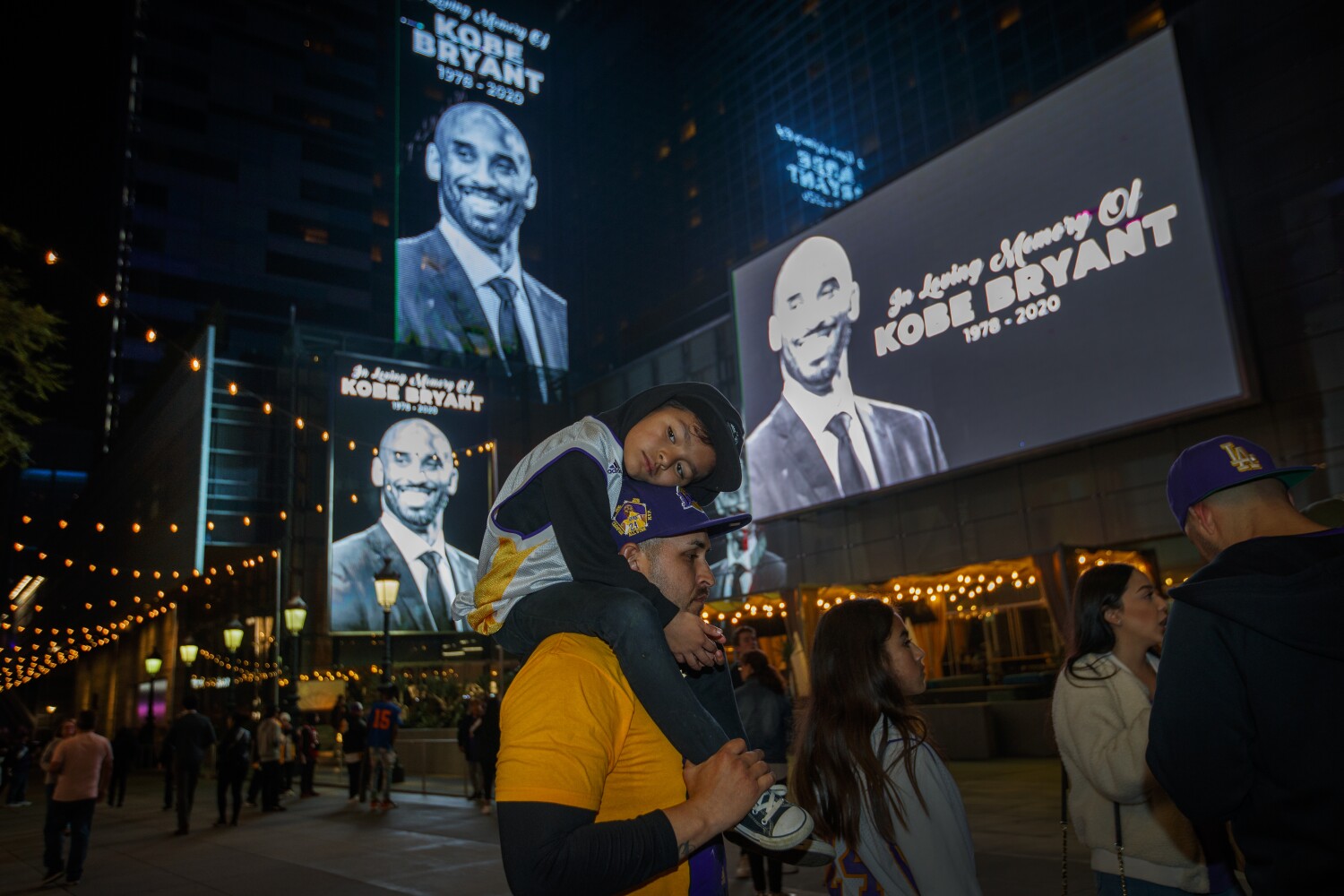 The mood at El Camino Real in Fullerton was somber during the Sunday lunch rush, despite the steaming bowls of menudo in front of nearly everyone in the packed Mexican restaurant.

Its most famous regular, Kobe Bryant, had died earlier that morning in a helicopter crash in Calabasas, along with his daughter Gianna and seven others.

Families shook their heads in disbelief as they scrolled through their smartphones for the latest updates between sips of the tripe soup. Freddy Castañeda, son of El Camino Real’s owners, showed customers a photo that Bryant had taken in the kitchen alongside his sister Marissa nearly 20 years ago.

Joel Viramontes of La Habra, who wore a Nike SpongeBob SquarePants sweatshirt that featured the cartoon icon dunking a basketball, took a call. His face was in pain.

“He loved this place because people treated him like a normal person,” El Camino Real general manager Rodolfo Garcia said over the thud of a butcher breaking down carne asada for tacos. Bryant’s wife, Vanessa Laine Bryant, had introduced the Lakers superstar to her childhood favorite restaurant almost as soon as the two began to date.

Sometimes, the couple and their daughters dined in; when Kobe didn’t want to draw attention, he’d sneak in through the back to hang out with workers and greet everyone in Spanish. And if he couldn’t come in person, Bryant called in big orders that friends picked up to take back to his Newport Coast mansion.

The shooting guard’s favorite meal: carnitas, with flan for dessert.

As tributes and memorials to Bryant sprouted across Southern California, a Mexican restaurant might seem an odd place to remember him.

But Bryant’s longtime patronage here spoke to his affection for and participation with Southern California’s largest ethnic group. Around Latino Los Angeles, from swap meets to sneaker stores, on social media (where fans shared corridos dedicated to “compa Kobe”) and at parties and gyms, they spoke of him with reverence.

Many saw themselves and their culture in him: The work ethic. The marriage to a Mexican American woman. The devotion to his daughters. His better-than-not, if Italian-inflected, Spanish.

Hugo Flores, 29, has played pickup basketball since high school, when Bryant was at his peak. He remembers his teammates talking then about how Bryant reminded them of their immigrant parents.

“They had multiple jobs and worked like crazy, but they never made excuses,” the Anaheim resident said. “That was Kobe. He’d play with broken fingers and torn ligaments, and would never say a thing. He set that example, and so we had to do the same.

“We see that mentality in our culture — eres el más chingón [you’re the biggest badass],” Flores added. “That was Kobe every night, every day.”

Bryant’s special relationship with Latinos started almost as soon as he joined the Lakers in 1996. Two years earlier, the Lakers had become the first NBA team to broadcast games in Spanish. The superstars for previous generations of Latinos — Fernando Valenzuela in baseball, Julio Cesar Chavez in boxing — were past their prime.

“We were ready for Kobe,” said Cal State Channel Islands professor Jose Alamillo, who studies how Mexican Americans use sports to advance in the United States. As a UC Irvine doctoral candidate in the early 2000s, Alamillo and his friends frequently braved the long, traffic-choked drive from Orange County to Staples Center to watch Bryant play. They marveled at all the fellow Latinos in the stands, which Alamillo said didn’t exist during the “Showtime” era.

“He came at the perfect moment, when L.A. had become more brown,” Alamillo said. “He became our Latino superstar.”

By then, Bryant was already married to Laine Bryant, daughter of a Mexican immigrant. Together, the two embodied the thoroughly modern Southern California couple: multicultural, multilingual, aware of what they represented, and unashamed to express it.

Bryant embraced his wife during a nationally broadcast 2010 home playoff game against the Phoenix Suns while she wore a T-shirt that read, “Do I Look Illegal?” At the time, Arizona’s controversial Senate Bill 1070 — which critics said sought to make life miserable for immigrants living in the state illegally — dominated headlines.

On Instagram, Bryant frequently referred to Vanessa as “mamacita” — a term of endearment that was both maternal and romantic. In 2013, he released Nike sneakers with bright colors that mimicked a Mexican-style poncho.

By the end of his career, Bryant’s mastery of Spanish was such that he could comfortably conduct interviews in the language with no interpreter needed. He picked it up, he told Univision, by watching the long-running variety show “Sábado Gigante” and the 2005 telenovela “La Madrastra” alongside his wife and mother-in-law.

“Kobe was like a brother or a cousin, someone that you would invite to a family get-together,” said Juliana Bañuelos, who was filling up her Jeep at a gas station in Orange. “You didn’t even have to like basketball, and you still liked that he respected and loved Mexican culture.”

Even at his final news conference as a player, Bryant specifically shouted out los fans Latino.

“When I arrived [in Los Angeles] those fans were the fans that embraced me with the most passion,” he said. “They mean everything to me.”