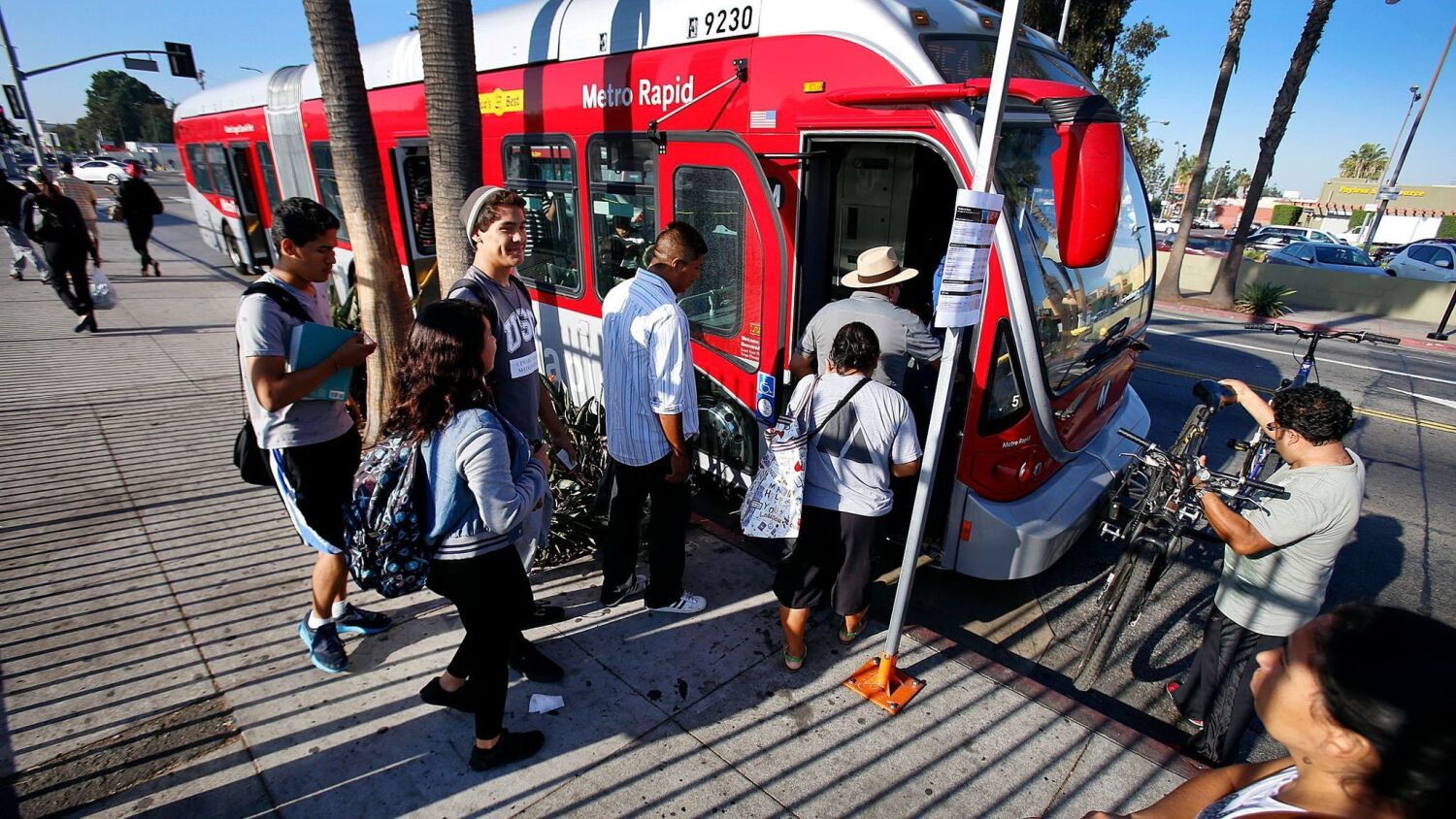 If approved, the Metropolitan Transportation Authority’s plan would be the first overhaul of the region’s bus network in more than 25 years. Riders would see changes on the street by the end of next year, officials said.

The plan calls for buses that arrive every 10 minutes or less — and in some cases, as frequently as every five minutes — on 29 major routes. About 83% of Metro riders could walk to a bus stop with that level of service, compared with 48% now, officials said.

The proposal also calls for a $1-billion, five-year capital program to improve bus reliability, speed and comfort. The proposal includes $750 million for bus-only lanes, synchronized traffic signals and other improvements, and about $150 million for shelters and other changes at busy stops.

“What we’re trying to do is create a situation where people can choose to ride transit more often,” said Conan Cheung, a senior executive officer of service planning and development.

The changes could boost Metro’s ridership by 15% to 20%, officials said. Trips on Metro buses have fallen nearly 25% over a decade as riders have fled for more convenient options — mostly, cars, which Southern Californians are buying in record numbers.

Metro’s directors are scheduled to discuss the draft plan at their Jan. 23 meeting. A final vote is scheduled for September.

Los Angeles Mayor Eric Garcetti, who is vice chair of the Metro board, said the plan would steer the region “in the right direction, toward dedicated bus lanes, higher ridership, and faster, more reliable service.”

The proposal follows more than two years of study at Metro on how to address its bus ridership woes. Officials concluded that Metro buses need to be faster and more efficient to stanch the ridership decline and attract new customers.

When traffic slows, Metro puts more buses on the street to stay on schedule. Each year, Metro spends $10 million more than in the previous year to provide the same level of service, officials said.

If the five-year plan to speed up buses were completed, Metro could run more than 5 million additional hours of bus service per year for the same cost as today’s network, Cheung said. Neither specific projects nor funding has been identified, he said.

Metro’s plan calls for a reallocation, rather than an increase, in the amount of bus service across the county. Not putting more buses on the street overall is “really disappointing,” said Jessica Meaney, the founder of Investing in Place, a transportation advocacy group.

“Are we serious about creating a bus experience that our Metro board of directors would choose to use?” Meaney said.

Officials said they could eliminate or reduce service on some Metro bus lines. Most of the network of red Rapid buses would be eliminated, with the exception of Wilshire Boulevard, Vermont Avenue and Van Nuys Boulevard, Cheung said.

Metro would also reduce the number of stops along the lines where buses would run every 10 minutes or less. Stephen Tu, a Metro director of service planning, said bus stops placed every quarter-mile or so could mean slightly longer walks, but shorter door-to-door travel times.

About 0.3% of Metro’s riders would lose their ability to walk to a line with a bus every 10 minutes or less, officials said.

If Metro’s directors agree to move forward with the proposal, public meetings would start next month.