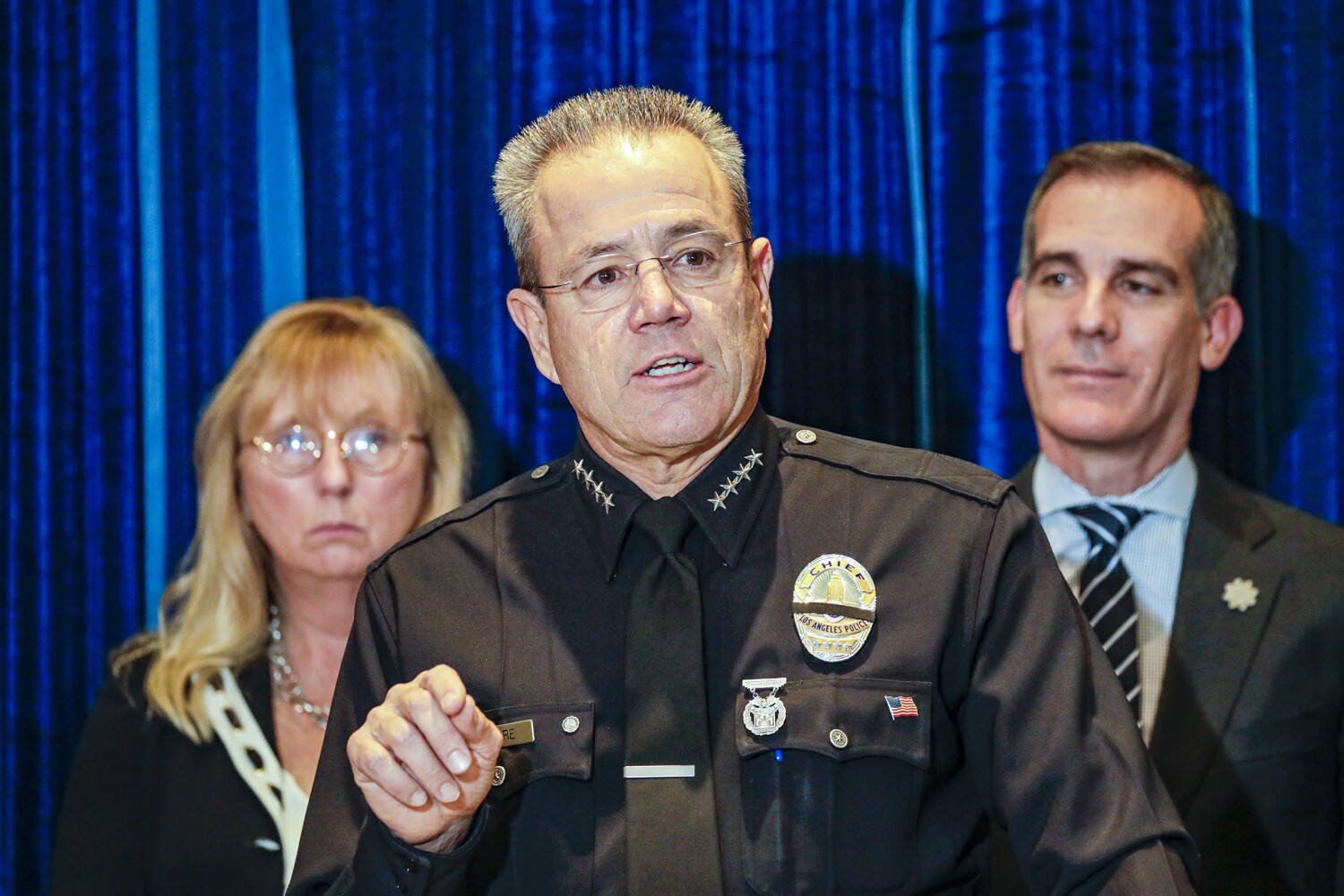 Los Angeles Police Chief Michel Moore is seeking to fire an officer in the department’s elite Metro Division accused of falsely portraying people as gang members after concluding that his actions were a serious violation of department policy.

The officer, who has not been identified, is among 20 members of the division being investigated on suspicion of falsifying field interview cards from traffic stops across the city and entering incorrect information about those questioned in an effort to boost stop statistics. Moore has referred the officer’s case to the Board of Rights, an internal disciplinary appeal panel, and also referred the case for criminal prosecution, according to a statement released by the department.

“Chief Moore has directed the officer to an administrative tribunal for the purpose of removal. The department has also presented this case for criminal filing consideration,” the statement said.

The officer was among an initial group of three officers placed on leave after body camera footage of the interactions did not match the information on field interview cards. An investigation into the officer’s conduct began early last year. The other two officers remain assigned to home pending additional investigation, Moore’s statement said.

Moore on Friday reiterated his commitment to “a thorough examination of all of the circumstances of this failure including what organizational issues or motivations may have influenced this behavior.”

“I have heard clearly the voices of those in our community who believe these actions discovered have existed in our past as well as today,” Moore said. “And while to date our investigation has found the vast majority of the time our personnel have acted with integrity, we are determined to understand what motivations existed for anyone to commit serious misconduct in the falsification of information on a Department report.”

In the LAPD disciplinary system, once a complaint against an officer is initiated, it is investigated and rises through the chain of command up to the chief. If an allegation is sustained, a commanding officer recommends discipline. The chief can either accept or modify the punishment, which can be appealed by the officer.

In the most serious cases, the chief can order a Board of Rights hearing for an officer. The department and officers can call witnesses during a hearing. The panel can find the officer guilty or not guilty of the allegations and find a penalty typically demotion, lengthy suspension or firing. The chief can either accept or reduce that penalty, but not increase its severity.

Moore has said the investigation initially focused on three officers and expanded to others who worked with the original three, and then on to others who worked with the second group. Now, at least 20 officers are under investigation. Sources familiar with the probe who requested anonymity because they are not authorized to discuss it publicly said the misconduct goes beyond falsifying of information on interview cards and that investigators found other violations as they reviewed the officers’ body camera footage.

The scandal came to light after a Van Nuys mother received a letter early last year from the LAPD saying her son was identified as a gang member during an interview with officers. She believed her son was misidentified and reported it to a supervisor at a nearby police station. Officials then reviewed body camera footage and other information and found inaccuracies they attributed to the officer.

The conduct of at least one of those involved, Metro Officer Braxton Shaw, is already the subject of a review by the Los Angeles County district attorney’s office.

While the department is it still investigating to determine the extent of the failure, it has begun to implement new safeguards “to ensure the accuracy and legitimacy of the information recorded by officers in the field.” the department said. High-level supervisors must now approve gang field identification cards by checking on the body camera video of the reporting officer. A more robust appeals process that allows people to be removed from gang databases is also being instituted. The department is also ordering retraining of all Metro and anti-gang officers in regards to more stringent criteria for information to be submitted to the California Gang Database.

Critics have long argued that police unfairly target blacks and Latinos during field interviews in which officers ask those they pull over whether they have a gang affiliation. The interviews frequently are used to populate a statewide gang database that has been criticized as outdated and inaccurate.

The LAPD’s data-driven culture has also come under scrutiny by critics who suggest that officers filled in the cards to artificially boost their statistics. The Times obtained what is known as a platoon recap sheet for the Metro Division, which shows that officers were measured daily in 16 categories such as guns, citations and arrests. Field interviews of gang members were among the categories used to measure productivity.

“We are looking into that,” he said. “I don’t know what would cause these men and women to game the system.”