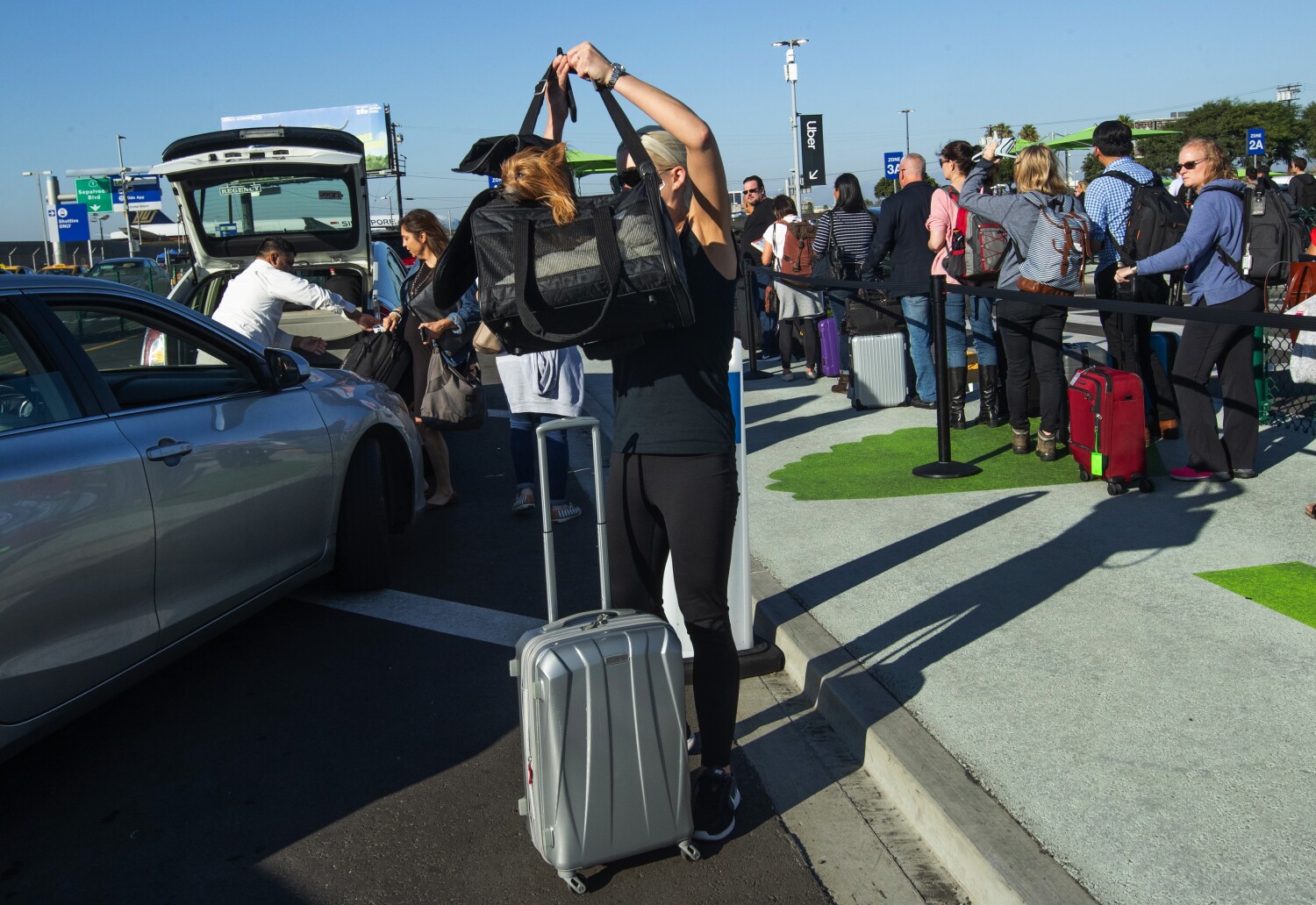 It was a stark contrast from the same time last week, when the airport banned Uber, Lyft and taxi pickups from the curb and moved them to a new pickup area next to Terminal 1.

Park ‘N Fly, which operates parking facilities at 14 U.S. airports, told customers in an email Wednesday that it was shutting down its LAX operation, remaining open only for customers who needed to retrieve a parked car.

“Please know that this is not our decision, and the airport has decided to take over our facility,” a recorded message at the Park ‘N Fly office in Los Angeles told callers. The company did not return a request for comment.

Airport officials came to a “negotiated agreement” with the company to stop providing daily parking, said Mike Christensen, the deputy executive director of operations for Los Angeles World Airports. He declined to comment on the terms of the agreement, saying it had not been finalized.

Officials at LAWA carved out one-third of the Park ‘N Fly lot last month to build the new pickup area and claimed another major portion to expand it.

If the airport needs to expand LAX-it again to prepare for the Thanksgiving rush, they will need to take over the final portion of the Park ‘N Fly lot, Christensen said.

“We’ve done it to create more contingency and flexibility,” Christensen said. “We want to have another contingency plan in our pockets.”

For now, Park ‘N Fly will continue to offer monthly rates to the companies that rent about 600 spaces in the lot, Christensen said.

Customers who had pre-paid Park ‘N Fly for an upcoming trip should instead go to the WallyPark garage on Bellanca Avenue and present a printed confirmation voucher to the attendant when leaving the garage, the company said in the email.

Andrew Friedlos, 31, arrived at LAX at 6:15 p.m. Tuesday for an overnight flight to New York for a bachelorette party and wedding. He had prepaid almost $200 to reserve a parking spot, he said.

He pulled up to the Park ‘N Fly entrance and found it barricaded, with no signage and no employees to explain what had happened. In a shouted conversation through his car window, he learned that the company had shut down the lot.

“Realistically, if they’re going to keep screwing with everything, I’ll just start flying out of a different airport,” said Friedlos, who lives closer to Orange County’s John Wayne Airport and Long Beach Airport.

The change expanded the LAX pickup area by about half. Lyft cars were given additional space, while Uber took over Lyft’s former space in the original lot. Taxis also now have additional designated space to load passengers, officials said.

The only major snag of the day emerged just before rush hour, when Lyft announced a nationwide outage on its app. Lyft workers at LAX wound up directing travelers to get into the cars of their competitors, including Uber, Christensen said.

During the day Wednesday, wait times for pickup were 10 minutes at most, Christensen said. About 40 people stood in Lyft’s line at 10:35 a.m. Within 10 minutes, only a handful remained.

“This is a lot faster,” said Parin Shah, 50, from Oakland, who waited a few minutes as a guide apologized for not having a car ready immediately. “The funny thing is, it feels like what taxis used to be.”

Travelers in the taxi zones seemed to pour out of airport shuttles and climb straight into their cars. One employee led half a dozen passengers into waiting taxis in about a minute.

At the Uber pickup zone, which had no lines, one employee announced: “All the way down! I have an Uber waiting for you.”

Barbara Najar, 44, who was returning from a trip to Las Vegas, said she knew about the complaints regarding the new pickup system before coming to L.A. Najar walked the short distance between Terminal 1 and the pickup lot and ordered her Uber from there.

“It was actually fine — super-organized,” she said, and it was better than “running around in circles” looking for a ride.