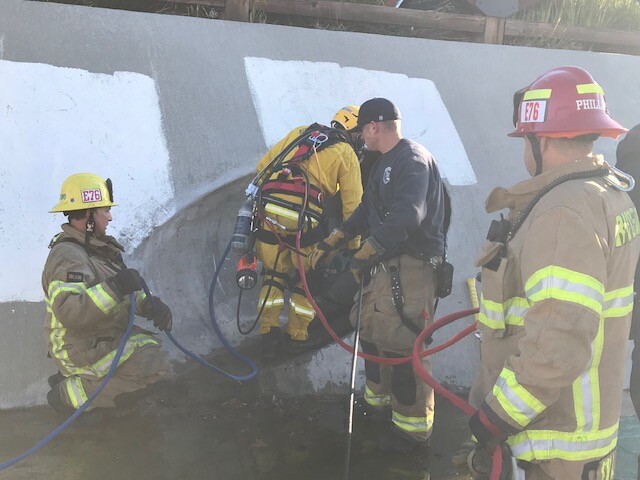 Riverside County and Cal Fire firefighters on Tuesday freed a man who was wedged deep inside a storm drain pipe for nine hours in Temecula, authorities said.

Riverside County sheriff’s deputies responded about 1 a.m. to the 31000 block of Hickory Place, where a storm runoff channel runs off Pechanga Parkway, and firefighters arrived soon after, said Rob Roseen, a spokesman for the California Department of Forestry and Fire Protection.

Roseen said authorities received a call from residents in the neighborhood who heard screaming.

Authorities said it was not immediately clear how Jacob Turpin, 28, got stuck 270 feet inside an 18-inch-wide storm-drain tunnel.

Turpin, a Lake Elsinore resident, was initially not responsive but firefighters ultimately were able to crawl through the narrow pipe and rescue him, Riverside County Sheriff’s Deputy Robyn Flores said.

After a nine-hour effort, Turpin was transferred to a local hospital with moderate injuries, Roseen said.