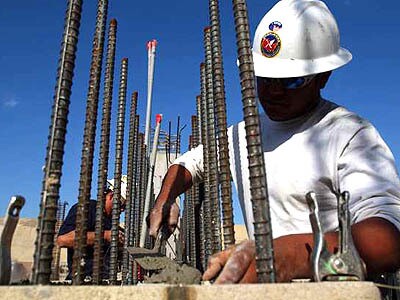 A $15-billion bond measure to improve school and college facilities may offer limited aid to the Los Angeles Unified School District — which has not endorsed the March 3 ballot measure despite widespread support from school systems, teachers unions and universities throughout the state.

Several provisions in Proposition 13 (which has no relation to the 1978 measure that capped property tax increases) are of concern, including reductions in developer fees to the district and how the state would prioritize distributing the money if it passes.

Unlike some school districts, Los Angeles has not yet released monetary projections on how the bond could affect the district.

The measure calls for a 20% reduction in fees that developers pay school districts when they build new multi-unit housing. The bond would eliminate those fees altogether when that housing is built near transit hubs, which L.A. city leaders have said is a priority. The limitations would be in place until 2026.

The L.A. school district has collected an average of $92 million annually over the last three years on all types of developments, with the highest fees charged for new housing — because it has the most impact on the district. District staff were unable to provide information on how much of those fees were related to the kind of residential construction named in the measure.

“I would be concerned about any proposition that causes us to lose anything in terms of funds for children, and if that is the case then I’d be cautious,” said school board member George McKenna, who represents parts of south and southwest Los Angeles.

The recent Los Angeles housing and construction boom has helped pay for new classrooms, fire alarms and sprinklers, seismic upgrades and such improvements as ramps and elevators needed to comply with the Americans with Disabilities Act, according to reports prepared by the district’s facilities division.

Bruce Fuller, a professor of education and public policy at UC Berkeley, said the loss of developer fees could be a “significant hit” to L.A. Unified. And after L.A. voters last summer defeated a parcel tax to help fund schools, “it’s understandable that the district would be cautious,” he said.

The only staff briefing to the school board on the bond was about a five-minute presentation during a Jan. 16 committee meeting. A video record of that meeting shows only one board member, Kelly Gonez, present at the time for that legislative issues session.

“We’re still assessing what this would all mean for L.A. Unified,” said district lobbyist Martha Alvarez, during that meeting. “There’s still a lot of information that we’ll be gathering.”

The bond needs a simple majority to pass. A statewide survey released last week by the Public Policy Institute of California showed a tight race, with 51% of likely voters approving of it.

Of the bond’s $15-billion total, $6 billion would be divided evenly among the University of California, Cal State and community college systems, and $9 billion would go for preschool through K-12 schools, including charter schools and career and technical education facilities.

“Our share will be a small fraction” of the bond, said L.A. schools Supt. Austin Beutner.

He said he considers Proposition 13 helpful but not nearly sufficient to fix aging schools across the state. L.A. Unified in particular needs much more than the bond would provide, he said.

How the state would award the money

Provisions in the bond change the way the state prioritizes funding decisions, which could affect Los Angeles.

When applying for state bond money in the past, school districts have been awarded on a first-come, first-served basis — meaning that those with the capacity and staff to navigate the application process often won. Those rules gave bigger or wealthier districts an advantage.

Under Proposition 13, a district’s ability to raise money through its own local bond measures would be considered as well as its facilities needs. This stands to help smaller and rural districts with lower property values.

Priority would also be assigned to districts that need to make “health and life-safety repairs” on their campuses, haven’t recently applied for state money, and serve larger percentages of foster youth, English learners and students from low-income families.

“If you have a lower-income community you have less opportunities to raise funds using the same methods,” said Lillian Maldonado French, superintendent of the Mountain View School District in El Monte.

Proposition 13 “equalizes just a little bit that playing field,” Maldonado French said. “It gives us a little more opportunity to be at least in front of the line.”

Mountain View meets many of the criteria for priority funding, Maldonado French said. Of its 6,000 students, about 94% are eligible for free or reduced-price lunch, are foster youth or are English language learners. The district has passed only one local bond — for $57 million in 2016. And repairs to sewers, roofs, water and electricity top its wish list for spending.

Outside L.A., many school district endorsements

The bond enjoys widespread support from school districts both urban and rural, large and small — as well as the leadership of the UC, Cal State and community college systems. Both statewide teachers unions have endorsed it, as have charter school advocates.

“When we don’t have that strong voice from L.A. Unified, it’s definitely a missing voice in the advocacy,” said Richard Barrera, vice president of the San Diego Unified school board, which voted unanimously to support Proposition 13.

Education finance and policy experts said Proposition 13 puts Los Angeles in a conundrum as it may not be wise to expend valuable political capital mobilizing voters around a measure that will not go far enough to address the district’s considerable needs.

“I’m also concerned about anything that may inhibit us from passing our own bond measure in the future,” said McKenna, who generally supports school bonds and other revenue measures for schools. “If the community has already voted for something and we come back again, will it inhibit our ability to have the community support a second round of funding?”

In the Central Valley, the Fresno school board supported the state bond, under which the district estimates it would be eligible for at least $10 million. Fresno voters will additionally consider a $325-million local bond in March. The district needs money to remove lead and asbestos, fix deteriorating plumbing, install or upgrade air conditioning, and build new libraries and gyms for students, according to a fact sheet on its website.

Districts in other urban centers have also embraced the bond.

Long Beach Unified spokesman Chris Eftychiou said his district could be eligible for up to $330 million from the state. “That’s $300 million that we don’t have at the moment, so it would certainly be welcome,” he said.

With 85 schools and buildings that date in some cases to the 1920s, Long Beach Unified is already in the midst of a “modernization campaign,” including seismic upgrades, removal of mold, asbestos and lead paint, and construction of new buildings for career and vocational training.

Eftychiou said he didn’t expect the new rules for awarding funding to stand in the way of his district getting its fair share.

In San Francisco, although the school board did not vote to endorse the measure, “it’s clearly something we would celebrate,” board President Mark Sanchez said.

He said that in past bonds his district had received $60 million to $70 million from the state, and he expected about the same from Proposition 13. Locally, voters have authorized more than $2 billion in bonds since 2000.

San Francisco Unified took in about $15 million from developer fees in 2018-19, Sanchez said. But he still supports the bond measure.

At community colleges and universities, campuses submit proposals for facilities projects to their governing boards, which in turn submit selected projects to the Legislature and governor for approval.

The proposition would change some of the rules for Cal State and the University of California, which would now be required to give priority to projects that address life-safety issues. University campuses would also be required to develop five-year plans to expand affordable housing for students.

Other support and an opponent

Teachers unions, construction unions, developers, the Coalition for Adequate School Housing and the California Democratic Party are the biggest donors to the “Yes on Prop. 13″ campaign, which is also backed by Gov. Gavin Newsom, dozens of legislators and many school associations.

The only registered opposition to the measure is from the Howard Jarvis Taxpayers’ Assn.

Local bonds are paid for with local tax increases; this statewide bond does not involve a tax increase. Instead it would be repaid over 35 years out of the state’s general fund at a rate of $740 million per year, which is equal to about half of one percent of the total state budget. The repayment of this bond and others would limit the amount of money that the state has available to spend for other purposes.

To pay for school projects, state bond money is usually combined with local bond funding, which could result in a local tax increase.