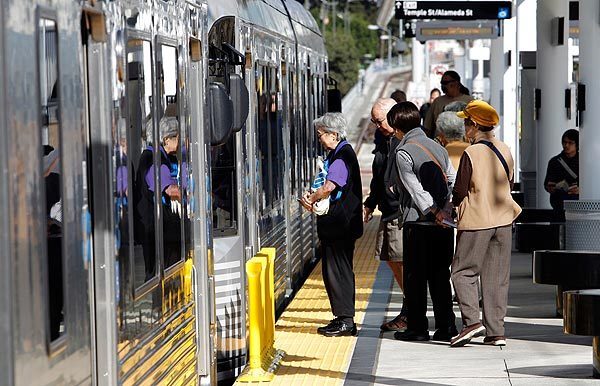 Metro is closing its Little Tokyo/Arts District Station beginning Saturday to complete work on a 1.9-mile rail extension project that will tie three lines together in downtown Los Angeles.

Service at the station will end Friday night. The next day, Metro will launch a 22-month construction phase of its Regional Connector transit project, which includes the demolition of the current Little Tokyo Station, according to Metropolitan Transportation Authority spokesman Rick Jager. A new underground station will be built in its place at nearby 1st Street and Central Avenue, he said.

During construction, service will be affected along the L Line — formerly the Gold Line — which runs from Azusa to East Los Angeles and includes the Little Tokyo stop.

Transit riders seeking to travel between Union Station and the Pico/Aliso Station in Boyle Heights will be offered free shuttle bus service during the closure. Riders can then get back on the train and continue their destination in either direction, Jager said.

Commutes are expected to be delayed.

“It’s going to be an inconvenience; we absolutely understand that,” Jager said, “and we’re asking people to plan ahead.”

Metro plans to complete the Regional Connector by the fall of 2022. Once it’s up and running, riders are expected to see a reduction in their commute times of about 20 minutes, Jager said. That’s because the project is slated to eliminate transfers for travelers heading north-south and east-west by connecting the A (Blue), E (Expo), and L lines through downtown Los Angeles.

The Regional Connector will make it a seamless ride, Jager said. Metro anticipates the line, which will have three stops in downtown Los Angeles, will eventually serve 88,000 riders daily.

Amid the pandemic, the L Line’s ridership has dropped about 50%, Metro officials said. It currently carries a weekday average of about 23,000 riders, down from 47,000, Jager said.

This is the “final push” of the Regional Connector project, according to a Metro news release. The project has been under construction since late 2014, and was originally anticipated to be completed this year, according to Streets Blog.