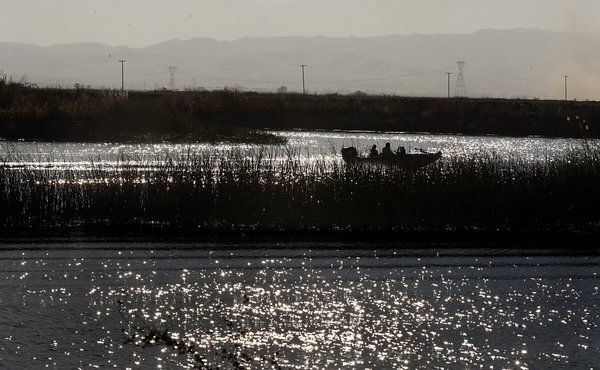 California officials sent mixed signals Thursday when they said they will sue to block a Trump administration rollback of endangered species protections for imperiled fish — while also proposing new water operations that mimic parts of the Trump plan.

The state moves reflect the political pressure the Newsom administration has been under as it confronts one of California’s most intractable environmental conflicts — the battle over the ailing Sacramento-San Joaquin Delta, the center of the state’s water system.

Some of California’s most powerful water agencies have urged the state to go along with the Trump rollbacks, which promise to send more water their way by relaxing delta pumping curbs.

But environmentalists and delta interests have pressured Sacramento to counter Washington by beefing up delta fish protections under the state’s own endangered species law.

Side with water users and Gov. Gavin Newsom could jeopardize his reputation as a leader of the Trump environmental resistance. Side with environmental groups and he could alienate major water players that supply the urban Southland and San Joaquin Valley agriculture.

Thursday’s announcements appeared to give something to both sets of interests: In coming weeks the state intends to sue federal agencies over the rollback, which has not yet taken effect.

At the same time, the California Department of Water Resources is proposing new rules for state pumping operations in the delta that loosen some existing limits and give water managers more flexibility in how they run the department’s giant export facilities that fill the southbound California Aqueduct.

The state actions elicited mixed responses from water users and environmentalists, who saw things to like and dislike.

Doug Obegi, an attorney with the Natural Resources Defense Council, criticized the state’s proposed delta pumping rules as “Trump-lite.” But he praised the lawsuit.

“Suing over the [federal plan] is a huge step forward. That is the most important thing today,” he said.

Conversely, Jeffrey Kightlinger, general manager of the Metropolitan Water District of Southern California, said he didn’t support the lawsuit but liked many of the provisions of the state’s proposed pumping rules.

For their part, state officials emphasized the rules were not final and could change as they moved through the environmental review process.

The delta, a pastoral maze of farm islands and water channels formed by the merger of California’s two biggest rivers, has been in ecological free fall for decades. There are many reasons for the decline, but chief among them are the massive fresh water diversions from delta tributaries and the delta itself.

Two giant government pumping plants — one run by the federal Central Valley Project and one run by the State Water Project — export supplies from the delta’s southern edge.

The state operations have traditionally adhered to federal endangered species protections for delta smelt, Chinook salmon and other species. But in the face of the Trump rollbacks, the state decided to develop its own set of delta operating rules under the California Endangered Species Act.

The draft environmental documents released Thursday are the first major step in that effort. They outline the state’s proposed pumping rules, include several alternatives and open the proposal to public comment.

Like the new federal rules, the state draft includes approaches that water users have long sought, such as relying on real-time monitoring of imperiled fish and delta conditions to determine pumping levels rather than strict seasonal guidelines.

But Nemeth said there were some key areas in which the state proposal diverges from the new federal rules, which she said do not offer adequate safeguards for species protected under California law.

The state lawsuit is also an attempt to avoid the practical nightmare of having different rules govern the federal and state pumping operations. That could mean customers of the Central Valley Project gain deliveries at the expense of customers of the State Water Project.

Brenda Burman, commissioner of the U.S. Bureau of Reclamation, which oversees the federal delta operations, said she was disappointed in the Newsom administration’s decision to pursue legal action.

“If that’s their choice, we’ll see them in court,” she said in a statement.

A lawsuit is not the only weapon California has at its disposal. It can also refuse to let the reclamation bureau use state pumps and canals to convey delta exports that violate state environmental laws.

“We are making sure the burden of protections are shared,” Nemeth said.