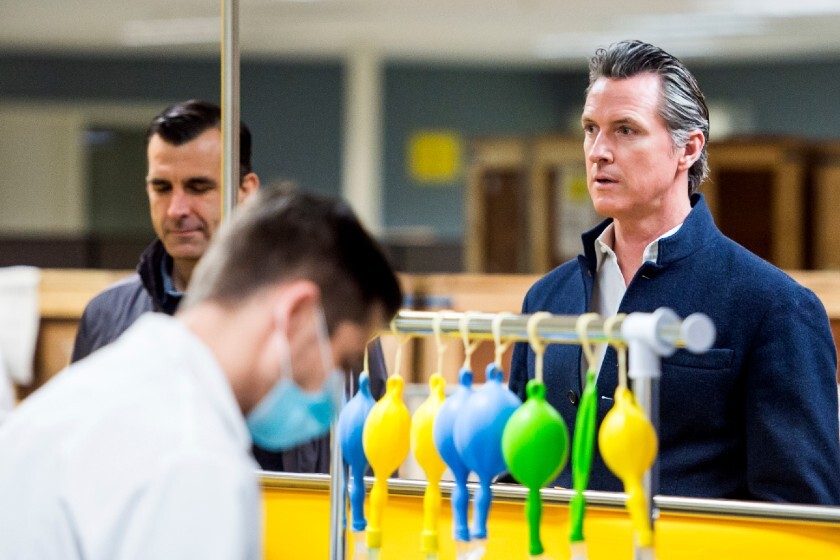 California will review the safety of all COVID-19 vaccines that receive federal approval before distributing them to the public, Gov. Gavin Newsom said Monday.

The governor announced the creation of a new work group of physicians and scientists working with the California Department of Public Health that will “independently review” all federal Food and Drug Administration-approved vaccines, he said.

“Of course, we don’t take anyone’s word for it,” Newsom said at a news conference on Monday. “We will do our own independently reviewed process with our world-class experts that just happen to live here in the state of California.”

Vaccines, like many other aspects of the nation’s response to the pandemic, have become increasingly politicized. Newsom’s insistence on a state review of any vaccines approved by the federal government comes amid concerns about whether the Trump administration will attempt to rush the approval process.

Newsom’s announcement also raised new uncertainty about COVID-19 vaccines just days after Dr. Anthony Fauci said he felt “strong confidence” in the safety of those approved by the Food and Drug Administration.

Fauci, the director of the National Institute of Allergy and Infectious Diseases, told CBS Evening News that he expects to know in November or December if some potential COVID-19 vaccines are safe and effective.

He said that if all six vaccine candidates currently undergoing clinical trials are proven to be safe and effective, they could be widely available by next April.

But the governor on Monday said mid-2021 is a realistic projection for when a vaccine would be distributed to the public. Newsom acknowledged the “political polarization” around vaccines and said the state needs to monitor the safety, distribution and health effects.

State public health officials last spring started having early discussions about how vaccines and therapeutic medicines to treat people with the coronavirus would be distributed in California once developed and approved.

Among the priorities would be to provide the vaccines to people considered most at risk from the virus, along with ensuring equitable distribution to people across the state, regardless of income or geography. In May, a top Newsom administration official said that this sort of planning is done whenever a new vaccine or medicine in great need to protect the public health is developed.

Those efforts came together in an 84-page draft proposal of a plan to distribute and administer vaccines that the California Department of Public Health submitted last week to the U.S. Centers for Disease Control and Prevention.

The broad outline, dated Friday, includes goals to prioritize vaccines while doses are limited for healthcare personnel at risk of contracting the virus, those at risk of severe illness or death from COVID-19, and essential workers. When vaccines become more widely available, the population of eligible recipients will grow to nonessential workers and the general public.

As states begin formalizing plans for vaccine distribution, governors are also calling for the federal government to provide more detailed guidelines and oversight.

New York Gov. Andrew Cuomo published a list of questions about vaccine distribution on Sunday that he said the National Governors Assn. sent to the Trump administration.

The association, which includes Republican and Democratic governors, asked the federal government about federal funding, insurance coverage, prioritization, monitoring health effects and other critical issues related to the distribution and implementation of future vaccines.