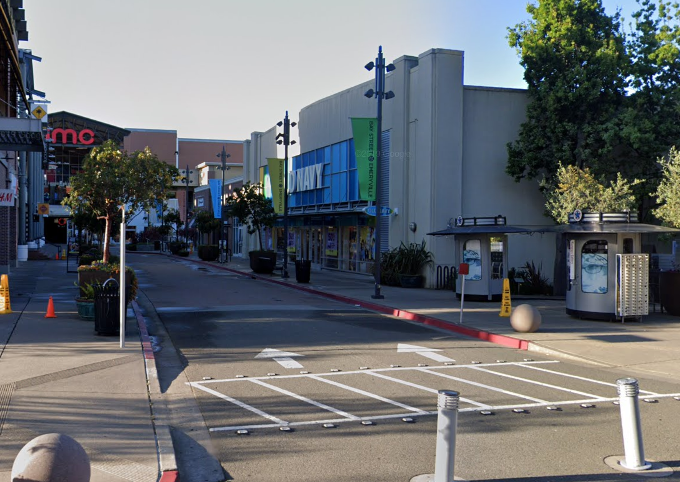 A California Highway Patrol officer is recovering after being attacked by a mob of teenagers at a busy San Francisco Bay Area mall on Black Friday after he tried helping a woman whose phone had been stolen, police said.

Two suspects, ages 14 and 16, were arrested, and authorities are looking for six others they say were involved in the attack at the Bay Street Mall on Friday night, said Capt. Oliver Collins, a spokesman for the Emeryville Police Department.

Collins said the encounter began when a woman approached the group of teens because she thought they knew the person who had stolen her phone.

Surveillance video posted by the Police Department shows the woman, with arms at her side, walk up to the group of mostly male teenagers, who tower over her. She appears to look up at one of the boys and say something before the teen forcefully pushes her away.

Police said an off-duty CHP officer saw the assault and tried to intervene.

According to reporting by KTVU-TV, the off-duty officer was trying to secretly take photos of the group when one of the girls in the crowd noticed him.

“The group then turned toward him and became violent with him,” striking the officer multiple times and choking him into unconsciousness, Emeryville police said.

Amid the violence, the video shows a teenage girl punching the woman whose phone had been taken.

After regaining consciousness, the off-duty officer pepper-sprayed one teen who was attacking him, police said.

“It was a melee,” the lawman said in an interview with KTVU, identifying himself only as Greg B. “It was chaotic, and it was a really scary situation.”

The off-duty officer was given medical aid. Collins would not say more about the injuries to the officer or the woman, but according to reporting by KTVU, the CHP officer suffered a concussion, a broken finger and bruising, while the woman did not appear to be harmed.

Collins said investigators don’t know whether the officer was armed or carrying official law enforcement identification at the time of the altercation.

“There was a lot of restraint that had to be practiced at that point, and I had to do my best to stay in the moment,” the CHP officer told KTVU. “I think this just came down to me not being able to look away and let this happen.”

The two teens arrested were booked in an Alameda County juvenile detention center, while the rest of the group fled. The suspects will not be identified because they are minors, Collins said.