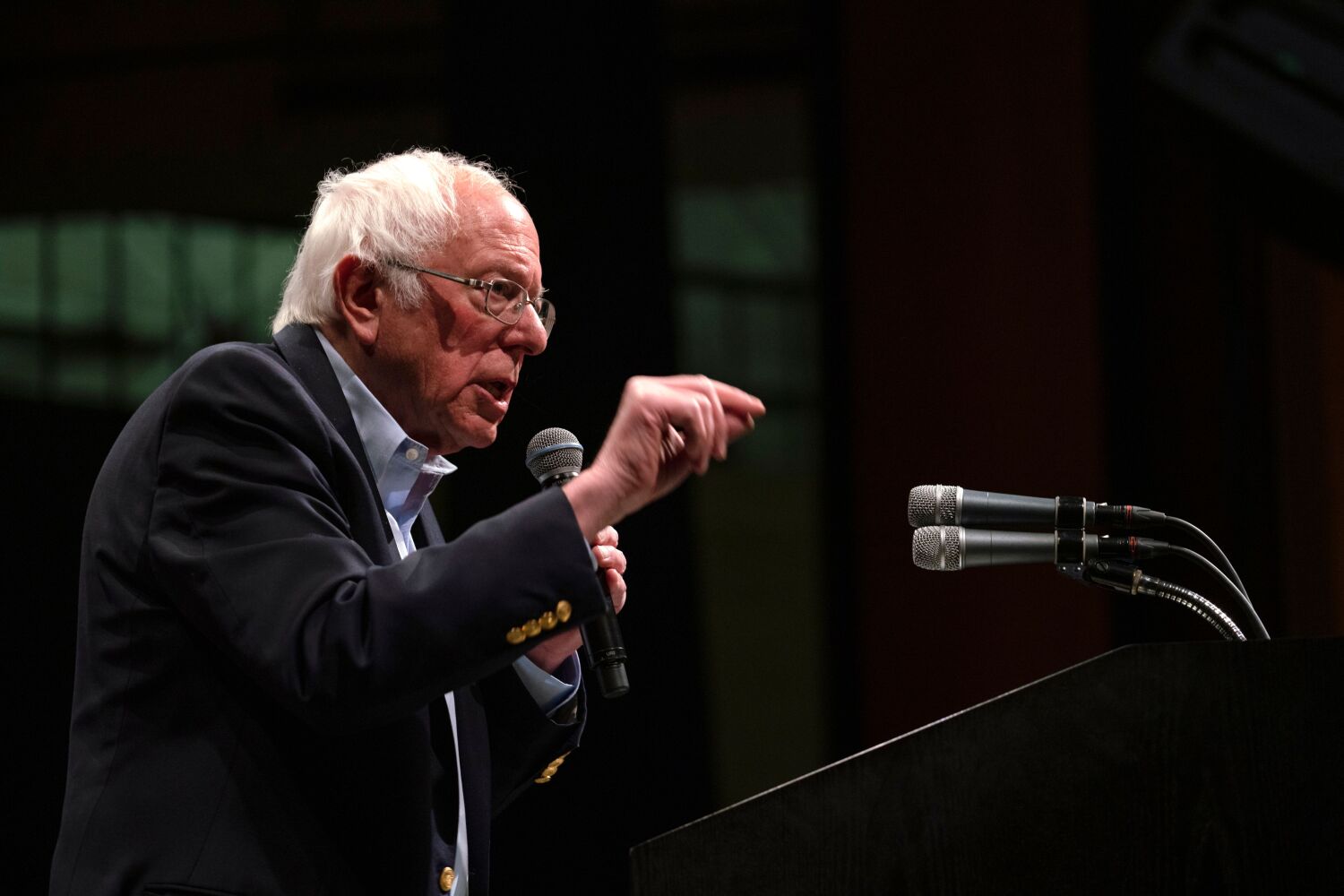 If you’re a California Democrat freaked out about the prospect of Vermont Sen. Bernie Sanders dragging the party into a disastrous pummeling by President Trump, you should closely watch South Carolina’s primary.

But if you are, hold on to your California mail-in ballot until the South Carolina results are announced Saturday night. You’ll still have until 8 p.m. Tuesday to get it postmarked or vote in person.

If your main goal is to send Trump packing in November — and it is for at least half the Democratic primary voters, according to polling — then be guided by how the candidates emerge from South Carolina.

Choose the strongest moderate who seems to have the best chance of stopping front-runner Sanders before he can nail down the party nomination at the Democratic National Convention in July.

That probably would be former Vice President Joe Biden, if he can recover from humbling losses in Iowa, New Hampshire and Nevada. Lesser good bets are former South Bend, Ind. Mayor Pete Buttigieg and Minnesota Sen. Amy Klobuchar, based on South Carolina polls.

Klobuchar and Massachusetts Sen. Elizabeth Warren, who competes with Sanders for liberal voters, could be forced to soon drop out of the race. They’re running low on cash. And their money wells will dry up without unexpected strong showings in South Carolina and on Super Tuesday, when California and 13 other states hold primaries.

California hedge fund billionaire Tom Steyer has poured tons of his own money into South Carolina TV ads and moved into third place behind Biden and Sanders, based on polls. But come on, he doesn’t really belong on the same stage. He should run for governor or U.S. Senate — better yet the U.S. House — before running for president.

But Bloomberg isn’t on the South Carolina ballot. His first test before voters will be on Super Tuesday. So if all other moderates are looking weak, California Democrats could roll the dice on him.

There’s one all-important number to remember. And that’s 15.

These are no longer just beauty contests as they were in pint-sized Iowa and New Hampshire. There, victories were all about showing electability and gaining momentum. Now the primaries are about winning masses of delegates.

California will offer a monstrous number of pledged delegates, 415. There’ll also be 79 unpledged so-called superdelegates. Combined, California will send 494 delegates to the convention in Milwaukee — nearly one quarter of the total needed to win the nomination.

Of the pledged delegates, 271 will be awarded within the state’s 53 congressional districts. A candidate will need to receive at least 15% of the vote to win a delegate. Similarly, 144 delegates will be awarded based on statewide voting totals and, again, there’ll be a 15% threshold for each candidate.

Right now, Sanders is running away with the California race, based on polls, and it’s conceivable he could practically sweep the state’s pledged delegates, or at least win the lion’s share.

So Democrats who want to slow him down should do the math and vote for the moderate with the best chance of breaking through the 15% barrier. And we’ll know more about who that might be after South Carolinians vote.

But while the Democratic establishment has the jitters over Sanders and many moderates do, too, voters in the early contest states obviously did not. They made him the front-runner.

Sanders is an interesting character — a grandfatherly scold with a jabbing finger — who never emits any political doubletalk. I’ve always felt that his paradoxical appeal to young people is not merely based on his liberal ideas — such as tuition-free public college — but his straightforward demeanor.

There are no subtleties in Sanders-speak. He comes to the point immediately. Doesn’t waste words. Speaks clearly. And is consistent.

Sanders campaigns the way most reformers profess to like: He doesn’t beg money from special interests or wealthy “fat cats.” He has raised more than $96 million from 5 million-plus individual donors who have given an average of $18 per contribution. That’s practically unheard of in politics.

Californians have given him nearly $24 million in small donations.

And Sanders shows up. He has held more than 30 campaign events in California.

He has a very impressive nationwide network of grassroots volunteers, the sort of organization most politicians find too much trouble to organize. In California, he has 23 offices and 105 paid staffers.

“We’ve knocked on more than 1 million doors in California and made more than 5 million calls to California residents,” says campaign spokesperson Anna Bahr.

But the fear is that Trump would butcher him over being a self-described democratic socialist, dragging down the entire Democratic ticket and losing control of the U.S. House. Maybe.

His “Medicare for all” fantasy would be attacked. But it could never pass Congress anyway. Better to expand on Obamacare, as Biden advocates.

And face it, Sanders praising Fidel Castro for his literacy programs was just plain dumb. He’d better do a mea culpa in Florida or he can kiss off that state.