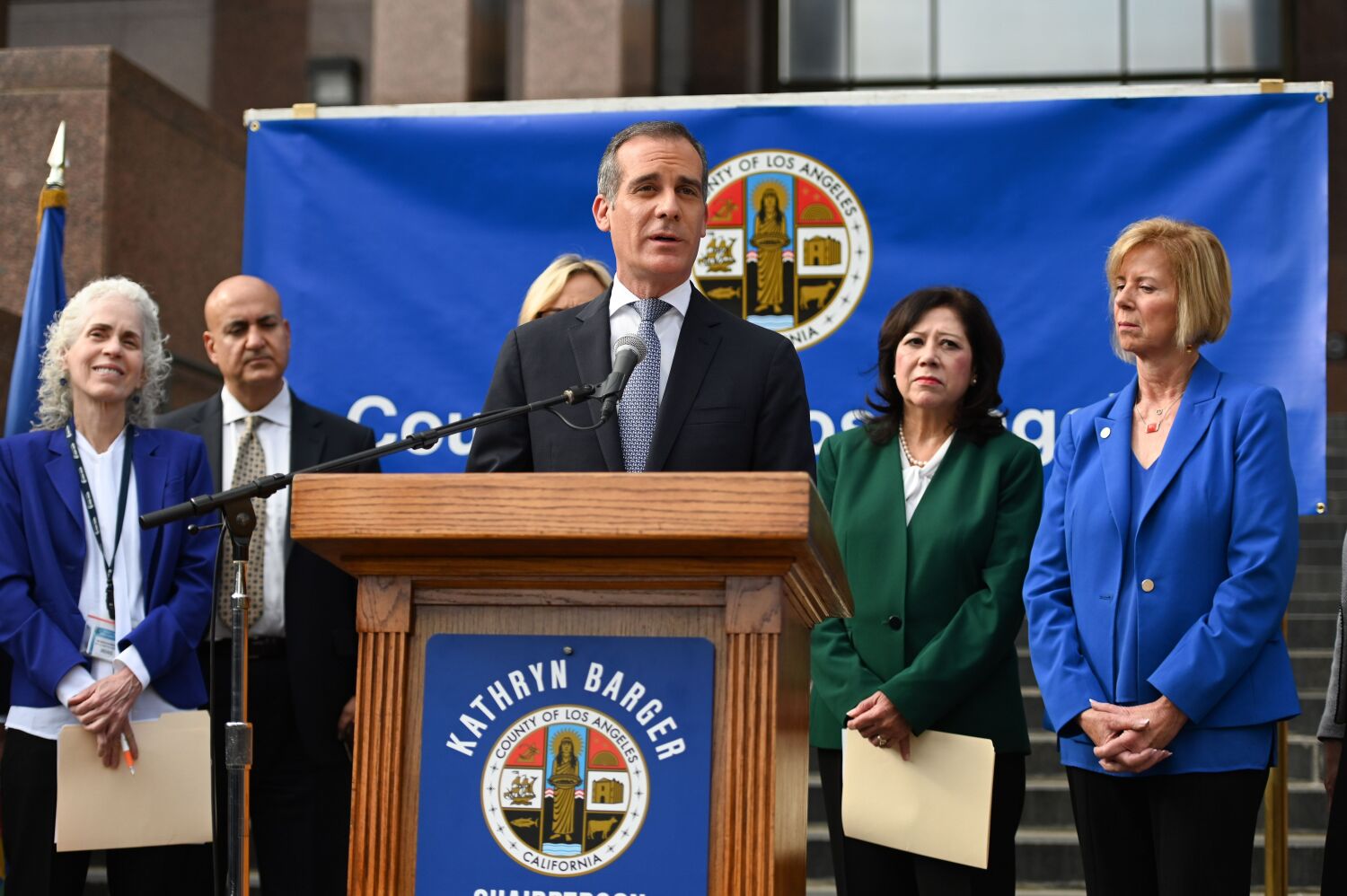 Government officials across California are taking new steps to try to control the novel coronavirus, which continues to spread across the state.

There are now more than 50 patients in California with the virus, with six new cases announced in Los Angeles County alone. One individual from Placer County became the first Californian to die of the illness, health officials announced Wednesday.

What do we know about the Los Angeles County cases?

Officials said three of the new cases were travelers who had visited northern Italy, two were family members who had close contact with someone outside of the county who was infected, and one had a job that put them in contact with travelers.

One person has been hospitalized, and the others are isolated at home.

“We have to be prepared. We have to protect the well-being of our loved ones and our neighbors,” Los Angeles Mayor Eric Garcetti said Wednesday in announcing the emergency declaration.

How about the new Orange County cases?

Two cases are pending confirmation from the Centers for Disease Control and Prevention. The cases involve a man in his 60s and a woman in her 30s who both had recently traveled internationally to countries with widespread transmission, according to the Orange County Health Care Agency.

Officials from the CDC are now looking to confirm those results.

At least five Northern California counties reported new cases of COVID-19 on Monday. On Tuesday, the city of Berkeley reported its first case after an individual visited a country with an outbreak of the illness. That individual has remained at home in a self-imposed quarantine since returning.

“While the risk of infection remains low, the expanded presence of the virus in our community is a reality we should all prepare for,” said Berkeley’s public health officer, Dr. Lisa Hernandez. “There are steps that all of us in the community can take now to improve basic hygiene and also prepare for a wider spread in the future.”

What other counties have reported cases?

Here are details on the cases.

What does an emergency declaration mean?

An emergency declaration gives cities and counties the ability to ask the state or other counties for aid if their local resources are exhausted. The declarations have been preparation-based, not because an outbreak currently exists.

Los Angeles County and the cities of Pasadena and Long Beach made emergency declarations Wednesday, while Marin and Placer counties made declarations Tuesday. The announcements follow similar decrees in San Francisco, Orange County, Solano County and other places over the last few weeks.

Officials stress that the declarations should not cause panic because they are designed to help focus resources and get a government response moving more quickly.

Los Angeles County will increase its capacity for testing of the virus at its local public health laboratory, officials said. Daily public radio briefings will be offered, and health officials will post new guidelines for schools and colleges. In addition, “technical assistance teams” will be sent over the next week to make site visits to temporary housing facilities, including homeless shelters.

Officials urged the public to frequently wash their hands, opt for verbal salutations in place of hugs and handshakes and try to maintain a distance of six feet from strangers.

“I want to reiterate this is not a response rooted in panic,” L.A. County Supervisor Kathryn Barger said at a news briefing. “We need every tool at our disposal.”

Supervisor Hilda Solis acknowledged the ongoing spread of misinformation about the virus and xenophobia toward Asian communities.

“There’s been too much misinformation spreading around,” Solis said. “As we expected, it’s cultivating fears and leading to racial profiling.”

Do we expect more cases?

This more aggressive testing, California state officials said Tuesday, “may lead to a more rapid increase in the number of confirmed cases reported. That is not necessarily a sign that the rate of infection is increasing, but that our ability to test more people more rapidly is leading to better detection.”

In Solano and Santa Clara counties, officials say patients have spread the virus within local communities. All the L.A. County cases so far have been people who appear to have contracted the virus through foreign travel or by being close to someone who recently traveled, officials said.

What else is California doing?

Gov. Gavin Newsom announced Tuesday that the California Department of Public Health received approval from the CDC and the National Institute for Occupational Safety and Health to dip into its emergency reserves of 21 million N95 face masks for medical workers on the front lines.

This has been a critical issue because of fears that health workers could get infected without proper equipment.

“California is working hard to ensure our healthcare system is in the strongest possible position to respond to this evolving situation,” Newsom in a statement. “Critical to that effort is making sure healthcare workers have the medical masks and protective equipment they need to protect themselves while caring for patients. Our state is extremely grateful for the hard work and dedication of our healthcare workers in this time of expanded need.”

At this point, the state has not declared a state of emergency.

How does California compare to the rest of the country and world?

The CDC has reported more than 100 cases of the virus in the U.S. There have been 10 deaths: nine in Washington and one in California.

There are currently more than 95,000 cases and more than 3,000 deaths globally, the majority of which have been in mainland China, the epicenter of the outbreak.

Who is most at risk?

Officials have said that elderly individuals and those with underlying health problems are most at risk for contracting the virus, which attaches itself to the lungs and can result in respiratory illness like pneumonia.

How can I protect myself?

The most repeated recommendation from officials is for the public to diligently wash their hands for 20 seconds after touching exposed surfaces (here’s a list of songs to sing for those seconds). Hand sanitizer should be used when water and soap are not readily available but should not be a replacement to hand-washing.

Additionally, officials recommend that people cover their sneezes and coughs to protect others and to avoid close contact with strangers.